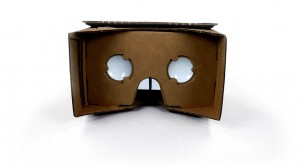 Did anyone watch the Google IO conference broadcast, or better yet, was there?  Hope you are enjoying your watches.  But more importantly, are you enjoying your cardboard HMD?  I have to admit, that caught me by surprise, but very cool!  But the point of the VR glasses is to demonstrate Google’s VR Build Kit. I have not tried it myself yet, but I will check it out when I have time.  The point here is that VR is suddenly coming back into vogue.  A LOOONG time ago, VR was hot, I’m talking back in the 90’s.  Now we simply called it 3D, but when VRML and other 3D world applications first hit the market, people went nuts referring to VR and world changing.  Remember Second Life?  Perfect example. Everyone and every company was suppose to have a virtual storefront… which did not happen.   I spent most of my Collage education around spatial perception in virtual environments so I was drinking the cool-aid (at least in the beginning) as well.  However, as I started doing more research, I realized this was all a false promise and hinted to as much in my PhD thesis. And then just like that, it was over.

Well seems the pendulum has swung back to the VR/AR hotness again.  Beginning with the kickstarter project, Oculus, later purchased by Facebook (still not sure why), then a number of copy cat VR headsets, Motorcycle helmets with HUD displays (my favorite) and now Google has a VR dev platform with aforementioned sweet ass cardboard VR glasses mounts. So what is different this time?

Plenty.  When I was first playing in the VR/AR world, we had AOL dial up, Pentium I PC’s running windows 95 or 98.  Limited content and Headsets that cost in the thousands.  The most common way to experience a 3D world was through games or VRML.  Now a high-speed internet connection is pretty common.  Most desktop computers have more then enough power to display a reasonably detailed 3D world out of the box, and high power graphic cards are almost a 1/10th of the price from the 90’s. There is more content out there and its more connected.  Google 3D maps just itself has more 3D content then anyone would have time to completely consume. And of course, 3D games are constantly pushing the limits of an immersive environment with 60fps soon to become the new high standard for realistic gaming.

Finally, we have a plethora of new display devices.  Not just cheaper and better HMD’s for full immersive VR, but mobile phones, google glass (kinda) that provide AR (Augmented Reality) experiences, and yes, or new friend the Google Cardboard 3D viewer.  That does not mean suddenly everything is going to be VR/AR, we already learned that lesson, but as wearables become more common, I think we will see a smart phone that can fit into a simple glasses container that gives us pretty good VR/AR.  That is saying something. So with so many people who can now experience a VR/AR environment at little to no extra cost, what kind of apps will take advantage of this opportunity and bust out?

Well, lets find out.  Coming soon is a VR hackathon where like minded people can explore that question. Of course games will always be at the forefront, but what else? Perhaps someone can come up with a cool little app that runs on the cardboard headset google made.  And Perhaps someone will model this head mount in 3D and print a whole bunch of them.  Perhaps someone will grab a Leap motion detected, Like I did in a hackathon awhile back and allow a full VR experience with complex navigation.

Who knows, but what I do know is we have the confluence of check hardware, cheap/free software and wide pipes.  Its time to see what VR/AR can really do.