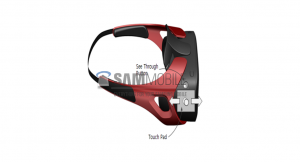 Last week at Google I/O, they sprang a cardboard phone holder that basically turn your smartphone into a VR HMD display device.  Its extremely  cleaver, and was quite the hit.  So much so, there is a strong demand for these guys even a week later.  Now we are hearing rumors that a plastic version of this is coming out called the Samsung Gear VR.  I’m not sure how true this is, but it would not be all that hard to make something like the Google Cardboard HMD in plastic and then make a few improvememts.  Might even work better since it would be lighter and made to better tolerances.  However, part of the rumor is that it will be more then just a phone housing as with the cardboard version.  According to Sammobile.com this thing will come with extra feature like:

On the right side of the Gear VR, there is a see-through button, which uses the smartphone’s rear-facing camera sensor to supply the user with a video feed of the real outside world – this way the user won’t need to remove and wear the headset again and again, which will make the overall experience of wearing the headset easier than alternatives from Oculus or Sony. There is also a touchpad located directly under the see-through button, which will allow users to navigate through the user interface on the Galaxy smartphone.

I wrote before how disappointed I was when the Galaxy Gear first come out, trying to put too into the device and then pricing it too high. Not to mention locking it to their own devices.  I also discussed how I was looking forward to the Google watch for the same reason, spoiler alert, I’m going to try to get on this week and hack on it.  So I do not have my hopes up that the VR Gear will be something I want to buy.  In fact, I would not be surprised to see it locked to the Galaxy line with a special driver that is matched to the optics making it unless with any other phone.

But what I DO expect, is someone out there is going to design a simple plastic version and sell it for $15 or even better,  a 3D printer version that can be put together with 3 or 4 parts.  I will be all over that.