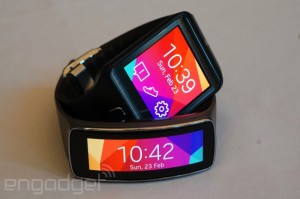 In Barcelona Samsung released 3 new Gear watches.  Well, really two and an exercise band, but I’m going to call this a watch anyway.  Of these three new smart watches, its the Gear Fit I’m most excited about.  First though, lets talk about the two other Gears, the Gear 2 and Gear 2 Neo.

Many writers, myself included, felt Samsung missed the boat with their first release of the gear.  It was big, ugly and tried to do too many thing.  Especially the camera on the watch band which you could not change.  Well it seems they listened.  The new Gears are slimmed down, watch bands can be swapped out and the battery life is twice as long. The battery life was extended by dumping Android for Tizen and a custom OS with the fit, but more on that later.  What Samsung is slowing starting to realize is what us Pebble owners have known for a long time.  We want something that looks clean, like a watch, does not try to do everything and had a long battery life.  Although we still need to see this out in the wild, the gear 2 and the Neo seem to be moving in that direction. 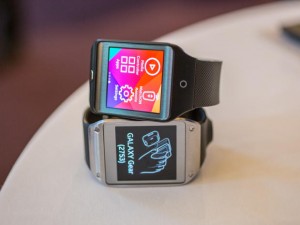 There are things I think the Neo could lose. For example, the whole IRLED sensor connects (via a WatchOn app) to your television to control it seems like kitchen sink category. However the hear monitor is a feature / function that I’m on the fence about. From what I can see from the pictures, the sensor does not take much space and it should not take that much power. For those that like to keep track of those things; I have a pedometer running on my phone, its a nice add. I’m most happy that they camera is gone.  It takes too much space and adds to much cost.  The Neo and Gear 2 are pretty much the same phones sans the camera, yet the Neo is smaller. Check the numbers:  it’s 37.9mm x 58.8mm x 10.0mm and weighs 55g, versus the Gear 2’s 36.9mm x 58.4mm x 10.0mm and 68g.  That is still pretty big compared to my normal looking Pebble, but its better.  And its FAR better then the original gear.

Now here is the downside.  Both Gears run on Tizen.  That does not necessarily mean it can only pair with other Tizen devices, but I’m betting it will because of Samsung’s decision to build out its own eco system. That is a shame because what I love about the Pebble is that I can use it with almost any smart phone. I’ve said this before, it would be nice if there was a way the Gear could be used with other smart phones, even if the functionality was limited.

Now lets circle back to the Fit.  First off, its different from the Gears because its running its own custom OS.  This is to save power.  Makes sense. But this form factor is wonderful and can easily be a new type of watch factor that would be quickly adopted.  The funny thing is 2 days before Samsung’s announcement, I wrote a post on what I wanted to see from Samsung and it looks a LOT like the fit.  In fact, as I was looking for images for this post, I found an even nicer watch concept from CNET Crave.  This is what a smart watch should look like.  Smaller, accomplished with a curved screen.  Simple, as the Neo is heading, replaceable watch bands and cross platform functionality.  Although that last one might be pipe dream. 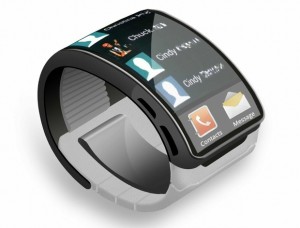