Wow.  Just read in Techcrunch, ( ta for the tip @thekenyeung ) that HP is killing the slate.  At least in its current format. There is a possibility it can come back running WebOS.  But till we know for sure, its dead. 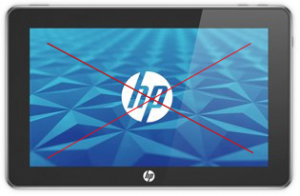 So who is left?  Google.  I have not heard much on the gSlate, but as far as I know its still in development. I can understand HP killing the tablet since its really not an appliance like the iPad is, but I guess they decided there was not enough market between the current tablet market (which is small) and the appliance market that the iPad owns.

So now what?  I decided not to buy the iPad because I wanted to see what HP does.  I guess I could wait for the Google tablet, but from what I understand, and TC also comments, that the Google tablets is suppose to be stripped down and cheap.  If that is the case, the touch screen  may not be good enough for high fidelity pen input.  Well… I was planning on getting an iPad when the price comes down, so unless Google really surprises me, I guess I will get the iPad.  Oh and the JooJoo?  Ha!  no.