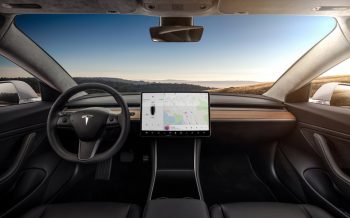 Long long time ago, I got the new iPhone.  I was one of the first.  So I used it for a week and thought, its nice, then discovered jail breaking!  Oh man, Apple fan boy overnight.  My favorite thing was to show off what this amazing new phone could do when I went to events/parties.  If I had a dollar for every person I convinced to get an iPhone…  Even more so when I got the 3G.  Then the iPhone really became what it is today.  And now I have the Tesla M3 and it feels like those days.

I remember standing in line to put my $1000 down on a car I have not even seen.  The excitement was like the first release of the iPhone, but without the wait.  So jump 2 years and my M3day was last month.  I love the car, although I wish the ride was smoother but I could fix that by changing the shocks… and I wont.  However, what I have found is that I love showing people the car.  I get excited talking about the fact that there is no dash.  LOVE showing the self driving.  The new electric motor the M3 uses, the smooth acceleration, how it looks, even the cool way the air vents operate.

Now there are things I would love to change now that I’m 30 days into my M3day.  I would really like to edit the UI.  Perhaps one day they will provide an API where I can code up my own via markup or directly in c++ or however they do it.  I’m also waiting for the self drive to improve and expand.  For example, the system should be smart enough to lean into a turn.  Right now the car still tried to keep the center line in a turn and ends up hugging the far line a bit too much for me and the unlucky person driving next to me.  This should be a simple algorithm fix.  (I work in computer vision for VR for a living BTW).  These details not withstanding, watching peoples eye light up as I let the car drive itself is so much fun.  I also love when people first sit in the car.  Its one thing to tell people, ‘no instrument panel, just a screen’ and then having people actually sit in it.   The comment I get all the time is, ‘ah so this is the future’.  And yes, I think it is.   Just like when I first got the iPhone and jailbroke it, I could see, this is where all phones are going to go.   The M3 is the first car in my mind that will signal, this is where we are going and I love sharing that.

BTW, why not say this about the S?  I drove the S a few times and really loved it, and it felt like really great electric car, but because of the dash, I still felt like I was in a normal car.  Also, the car felt too big, too many ‘features’ that were not really necessary, etc.  In other words, like the first iPhone.  Really cool, but not quite there yet. The dash-less experience with the M3, smaller more practical, only things on the car is what is needed on the car felt like a much cleaner design and more inline to what I would want in a car.  So like my iPhone 3G, yes the 2G gave me the first glips of the future, but the 3G is where I really experienced it, and so with the M3.