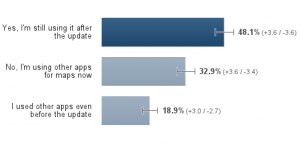 Last week I wrote a story on the reduction of people using iOS Maps, and cross posted on VentureBeat on how Snappli did a quick survey of use patters and found a significant drop in the number of people using Maps after iOS6.  Of course, plenty of fanboys got all in a huff questioning results, sample size, and interpretation of the data.

And actually, these are good questions to ask despite John Gruber inference that I should be writing disclaimers in my headlines.  Sigh.  Moving on, these are pretty stark numbers and so more information on how they came up with it, where they looking at traffic or application load counts, or could there have been anything else that would make these numbers so stark?

I followed up with Snappli with these points (especially the question about traffic vs app load events) and they responded.

We were keen to provide visibility into actual usage rather than anecdotal evidence. To that end, we were looking to see if we could detect any anonymized traffic from the Apple Maps app on any given day. We were not looking at the total amount of data used by the app. Our goal was to measure popularity, not how data hungry the app was, nor the impact of vector graphics.

Some of you have asked us whether we accounted for variability in traffic over days of the week – the answer is yes, we made the effort to look at usage for the five days before and the five days after a day zero (with day zero being the day each user updated to iOS 6).

Good enough?  Seems data flow has nothing do with it according to Snappli. Still not convinced?  Well lets add to that some data from Google Surveys. 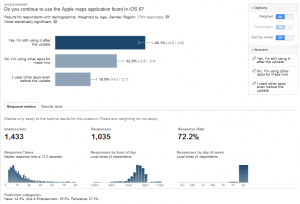 According to Google Surveys, it looks like a 12% drop in usage.  Depending on how you interpret the Snappli data, this does not line up with the drop from 1 in 4 to 1 in 25, but still, significant although at a sample of 1000 and further bia possibility must be questioned since this data is based on people who found the survey and took it.  So I’m not going to put as much faith in the Google data, however, the fact that this survey is also indicated a measurable drop in usage make me more confident that the general point; Map is so bad people are not using it; holds true.

This story has taken a live of its own and I’m sure Snappli will be pressured to provide more raw data to back up their assertions.  Here is a question though, can Google get these numbers as well?  They must know if there has been a raise in the amount of calls from their web based app vs native app.