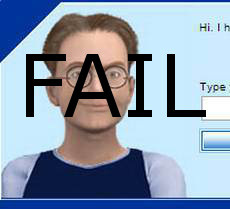 I was just as excited as everyone else when I read on a post via Reddit that a computer program called Eugene passed for the very first time!  Seems a supercomputer running a program called Eugene Goostman passed the Turing test during an event at the Royal Society in London. It convinced 33 per cent of the judges that it was human, said academics at the University of Reading, which organized the test.  However, as I read the post, I started to question some of the facts presented; 30% of the participants were convinced? Testers has to assume they were talking to a 12 year old boy?  Limited English? That doesn’t sound right.  Then I stared reading the comments;

BS;  Chatbot != A.I.;   Out of three judges, only one was deceived. So, while that IS impressive it didn’t really pass the Turing test…

I then let it pass out of mind ( and thus did not bother to write a post ), just yet another B.S. claim.  However, I AM going to write a post about it now because it seems this Kevin person has made a habit of making silly claims for press attention. There is even a website tracking them. Kevin Warwick Watch.  Seems the website TechDirt had to remind everyone of all the holes in his story, ESPECIALLY the reporters who should have known better.  So lets have a look at their list.

Okay, almost everything about the story is bogus. Let’s dig in:

Its not like these are things you need to have a major in AI to know; and the fact, I did a spot check of all the outlets that announced this ‘great event’, and with each one the commentators seemed to know more about the Turing test, and other problems with this story, then the writers.

Come on guys, I know you have to rush a story out to beat everyone, but at LEAST go back later and check your facts, or read the comments and update your story.