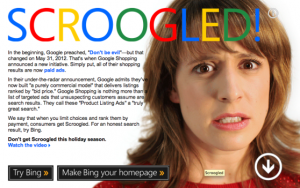 Sigh. I just do not get Microsoft sometimes. Most of the time their commercials are ok, and now and again, they are just pointless fluff as their surface commercials.  Then their latest efforts, we go to dumb bordering on insulting.

{Update:  According to TC, they are NOT going to end it. In fact, there is to be more!  Ug

“Scroogled will go on as long as Google keeps Scroogling people. We know Google doesn’t like it when the facts come out. Chapter two of the consumer education campaign has shown people care about their privacy. More than 3.5 million people visited scroogled.com, and nearly 115,000 people signed a petition asking Google to stop going through their Gmail. Stay tuned for the next chapter.”

If you have not seen them already, its a set of really ‘forced’ adverts where some clueless person is upset that Google is using keywords to fear monger gmail users because they will show adverts based on their email content.  So what?  Remember, if you are not paying for the product, you are the product. Aside from them looking for an issue that is not really there, and doing a poor job of it, it smells of desperation. To invent a word like ‘scroogled’ (who came up with that?) and suddenly its something you need to avoid is pretty weak.  Worse, does not say why you should use the recommended alternative, Outlook.  The funny thing is; Outlook is 100 times more powerful then gmail is.  If they simply had a commercial pointing that out, they would get further. 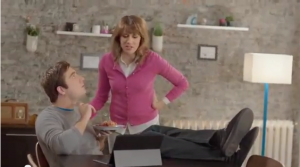 So this has been on my rant list for awhile and then this pops up on VentureBeat; Microsoft is to kill the Scroogled campaign.  About time. I guess I should give them credit for realizing these adverts are not working, but will they take a lesson from this?  That basically if you want us to buy/use your service, tell us why its better.  No flush, no fear mongering.  Say what you want about Apple (I’m not exactly the biggest fan boy out there as I type this on my PC) but they understand marketing.  When they put a commercial together, its clean and clear.  Here is what we have, here is what it can do for you.  Simple.  Presented in a clear and pleasant manner.   One would think people would have figured that out by now.

If you want to watch one of these painful adverts, check it out… Or not.