I have been pretty harsh on Samsung basically asking why are they throwing everything but the kitchen sink onto a watch making it large and ugly.  And why have they not released a curved screen yet?

Well they finally did.  And I think they got it mostly right this time. 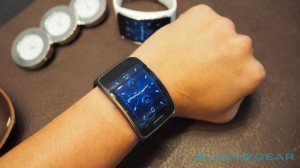 The Gear 2 S is still too big and heavy for my tastes.  The fact that this watch comes with 3G and wifi tells me they could still thin this out a bit more.  However, this is the best looking watch to date mostly because of the curved form factor and the refined minimalist design for the watch case.  Cannot say the same for the band, its too large and still has the metal clasp that I really never liked.  However what is gone are the camera, the IRLED sensor and other sensors in the band.  And did I mention the screen is big? 360 x 480 pixels big.  But because the screen is curved, it does not look as bulky as some of the smaller flat watch faces.  The face is big enough that you ‘could’ type on this, however, using swipe and word suggest is going to be the only way you will really be able to type if at all.  Check that out on the video below.  Although you do have wifi and 3G on this watch, you still need a companion device, i.e. a Samsung phone to make this work.  More on that later.

I do give Samsung credit for fast innovation.  This is their sixth watch and each watch seems to be dialing in better and better based on feedback, sometimes harsh, that has been coming in from all sides in the media.  But the fact Samsung ‘seems’ to be listening shows me that they are completely committed to owning the smart watch market.  But here is where things get sticky.

The New Gear, like the Gear before it is not using Android but instead running on Tizen, a custom OS from Samsung.  Although Samsung claims they will have 1000 apps ready by the release, apps running on Tizen is not the biggest limitation, but instead that they are only working with other newer Samsung phones.  As I said in a previous post, the desire on Samsung’s side is to create and control a complete eco system as Apple does.  The problem is Samsung is not Apple.  They do not have the rabid loyal following that Apple has.  And perhaps that is why they are iterating at a blinding speed, knowing that Apple has been dragging its feet on the iWatch, and this is their one best chance to really differentiate themselves in the market and perhaps make a name for themselves that is greater than the sum of its current parts.  With this current release they are on the right track, but will it be enough to convince people to not only leave iOS, but Android as well and live in a Samsung only world?  Time will tell.