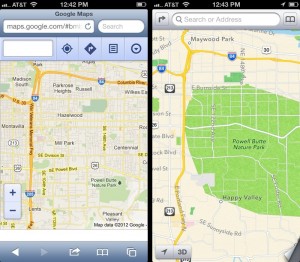 So its pretty much old news that iOS6 maps is awful. Many writers have noted its Maps failures and its even garnered a growing tumbler of fail. Its so bad, Apple actually apologized. However, we are now seeing data for the first time just how drastic the rejecting of maps is from iOS6 users.

A company called Snappli, which just launched a few weeks ago (see coverage here and here) is a free mobile app that helps users stay within their mobile data limits by compressing and optimizing mobile data as well as video — a huge mobile data suck. Today they pulled some pretty interesting data around Google/Apple Maps, based on data from Snappli users in the UK and US.

This data is based on the 5000 users that started using iOS6. Also, this data is a few days old.

Now this is just one data point and not enough to make general conclusions, but I would not be surprised if this is just the beginning of hard evidence that Apple users will not put up with degraded experience.

BTW, a side note. I never heard of Snappli till just now.  Its pretty interesting.  Basically once installed on your phone, will take requests and cache and compress those requests on their server and then send it back to you.  This includes video.  So if you have a limited plan, you can save some real money using this technique.  Even if you are unlimited, remember you will still get throttled if you are pulling too much.  In my case, I have unlimited and I do not pull that much (mostly because I do not watch video or play games) but I do visit LOTS of sites that are not always optimized for mobile, so just the performance increase is useful right there.

Right now Snappli is a free service, so I would recommend installing it and giving it a go!  I have only just now started using it.  I will update this post as I test it out a bit more.