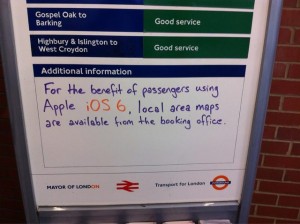 So I played a bit more with the iphone 5, the real deal, not my emulator, and Maps is worse then I thought.  So much that I thought I would bitch about it again.  However, before I let lose the downvotes, let me say right off, the iphone 5 is fast! fast fast fast!  I loaded this site perivision.net/wordpress and its faster then my home machine! Man!  If it was not for maps I would buy this JUST for that speed.  Caution though, part of why it fast is VERY aggressive caching, so much so its breaking certain features on some sites.  Seems to be related to caching POST calls instead of just GET calls, but that is another post.. But low..  Maps is the killer app for me and I use maps almost as much as I use the web browser. And until Google maps comes out, I’m holding back.  Ok, here we go.

I’m going to repeat some of the things I said in my first post; why iOS 6 maps is a disappointment, but before I do, I want to repeat a point. When ever a new iphone is released, there tends to be an issue here and there.  Antenna-gate, poor battery performance, crashing, etc..  Also, new features tend to need a little help. Siri was not all the perfect in the beginning… when it worked.  normally its pretty forgivable (except antenna-gate) because even though they almost never admit it, they tend to get things fixed.  However, this time, they have not released something new, but instead replaced something that was working well with something that CLEARLY does not.

Maps on the iphone was the killer app for me.  It was like nothing I have ever seen before with my other smart phones (yes there were smart phones before Apple folks) but the beauty, speed and usefulness of Maps was mind blowing.  Then came GPS, then directions including public transit and traffic.  It was sweet.  Life was good.  Now its sucks. 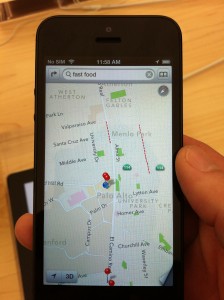 I’m not even going to start with the lost of public transport, it was there, now its gone.  Done.  No, its search that really bugs me.  I use Google map search A LOT.  And its very good. Not perfect, but very good.  Now when I try a search, like ‘fast food’, I do not get a list of fast food places near me, but places that have ‘fast food’ in their review. Did you know Jamba Joice is fast food?  Yup.  Next time I’m going to try a burger via their drive through.  Worse, its finding places that do not exist anymore, and sometimes gives you the wrong directions on how to get there.  Really!  How can you mess that up?

Oh and traffic.  Fu get a baw it.  I do not like how cluttered Google maps is but at least I can get the traffic info when I need it.  iOS6 maps?  A dotted red line. That’s it.  And not for all roads either.  Nice.  So not only cannot I not always find what I’m looking for, when I find it, IF I find it, it may not be there and I could get stuck in some serious traffic on the way.  Great.

I’m not the only one finding issue with iOS6 maps. There is even a tumbler dedicated to the screw ups.

Now Google is already working on, and most likely already finished with, their own map app.  I’m looking forward to seeing this as well as a jailbreak that will make the Google maps app my default mapping application.  But I would not be surprised if Apple decides to block it via non compete.

The iPhone 5 is a nice phone.  Its lite, the bigger screen looks odd but I’m sure I could get used to it, its SUPER fast, but I have no plans of getting one till mapping is sorted out.  I just hope Apple does not do something duchbaggery like killing support for the original Google Maps.  Hey, they might!  You never know.   And you know, that could push me over to Android.