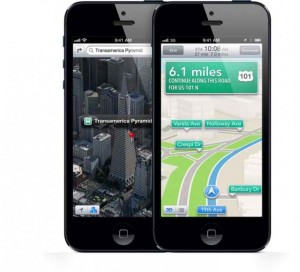 There are a lot of very cool things in iOS6 that iPhone 5 users are going to get. Maps is not one of them. Dont get me wrong, the 3D stuff is very cool, but I do not need this on my iphone. Street view would be far more useful. But that is not the dissapointment for me.  Its not what new feature we did not get, its the feature we lost.  Search.  The coolest thing about maps on the iphone when it first came out was search.  Italian?  Type Italian and you get a list of resturants near you that searve Italian food.  However, with iOS6, you only get places with ‘Italian’ in the name.  Fail. This is a really big problem.  As noted by Waze CEO Noam Bardin who provide Apple with traffic data along with TomTom and other providers said via Business Insider

“Apple went out and partnered with the weakest player,” he said. “They’re now coming out with the lowest, weakest data set and they’re competing against Google, which has the highest data set. What’s going to happen with the Apple maps, is that you’re literally not going to find things. When you do find them, they might be in the wrong place or position geographically. And if you do have it, the route to it may not be the optimal route.”

This lines up with what I have found when I finally got the beta working and tested it.  Shame.  Right now I rely on google map search to find almost anything and it works great.  For driving directions I use motionX which is a great turn by turn navigation app.  I do not know what motionX uses for search, but I really hope its google.

I have a hard time imagining that Apple is not aware of this limitation and thus must have a plan in place to try to improve the dataset, but I imagine this will take time.  In that time they may manage to piss off a number of users like myself who fell in love with Maps before anything else on the iPhone. In fact, it was Maps on the iPhone 1 that really impressed me, impressed me enought to become an iphone fan boy.

I still have hope though.  One of my MAJOR complaints with google maps on the iphone is how messy the traffic display is.  If you need to see what is going on with the freeways, I do not need to see every little side street as well making it almost impossible to see what is going on at a quick glance.  I have not see a good screenshot to see what this will be like, so I guess I have to wait to see this in action to really know.

Graphics aside, I’m expecting a pretty strong backlash from people complaining about poor search results and perhaps sub par navigation based on what I’m reading.  And who knows?  That might be enough to move a few people to Android.  Might be for me.  We’ll have to see.  In the meantime, no iOS upgrades for me thanks.  I wonder of one day they will simply cut off google for older iphone users?  That would really s&*k.