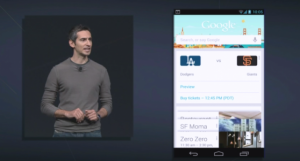 This is something I have been expecting.. A simply AI system that learns from your behavior to make voice interaction smarter.  Think of it as autocorrect for your SaaS personal assistant.  If you tend to call your SO on the way home from work often, then the next to time you say; call so and so, the system will know who you are mostly likely calling even if the voice sample is not good. Or the system knows you have season tickets for the game, it could set an alarm to let you know what the weather will be a few hours before you leave.  Here is more from VentureBeat

Essentially, this is Google’s answer to Apple’s virtual voice assistant Siri for iOS, which remembers important dates on your calendar, reminds you of appointment times, and allows you to search the web via voice controls. However, Google Now goes a bit above and beyond this concept by taking the data from your daily routine, search history, and other user behavior.

For instance, Google Now will learn your daily commute home. And if there’s particularly congested traffic that would cause you to get home much later, it’ll send you a notification suggesting alternate routes. Another thing it does is update you on restaurants/retail stores as you’re walking past them, provides reviews of those stores, and other recommendations.

I really love the driving aspect of this.  The more I learn about Android 4.1 jelly bean, the more I’m thinking my next phone could be an android.