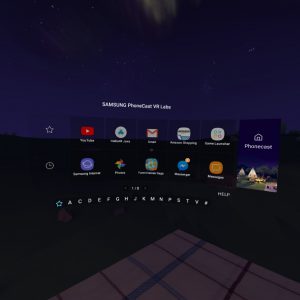 Here is something I have been waiting for, the ability to use my 2D Android applications and 2D games in VR.  The way it works is a 2D window is provided in your VR environment.  Within that window you can run Android apps!  Sweet Right? This GearVR App is call PhoneCast which is already out there.  Currently the applications you can use have to be white-listed.  However, all of the current apps are video streaming services, something that does not really interest me.  However, I got to test a new version that has a ‘labs’ area where instead of white listing apps, certain apps are ‘black listed’.  That means there are certain apps that are not allowed to run, but the rest are up to the user.  So of course, some apps may work, some may not.  That is why its called ‘Labs’ my friends.  The everyday apps seems to work fine, email, google photos, PowerPoint.  Typing with the keyboard was not fun, but this is to be expected.  I will say looking at PowerPoint is way better with the large display then using my phone.  As much as I like productivity apps, I really wanted to try a few games.

Some games seemed to have a glitch the first time I would try them.  I tried Fallout Shelter first.  Did not load the first time, but worked fine after that.  Not sure what the story is here. Same with Pokemon Go. Did not work the first time, then works fine.  However,  it locks to portrait and when using AR, the camera does not display correctly.  I turned AR off and it was fine after that. few other games seemed locked to one view port or another, but that was not too much of an issue after I got used to it.  I would make the window a bit smaller for portrait games, larger for landscape. 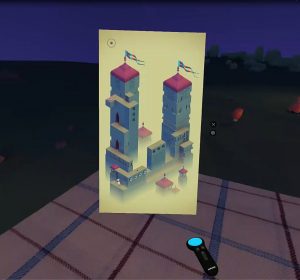 I then tried Monument Valley, a favorite of mine.  This took 3 tried, but again, seems to work after that.  That game play was even nicer with the view port set to the largest setting despite portrait mode.  I have it smaller in my screenshot.  It took a little bit of effort to get used to the controller, but I got it down soon enough.  I do not like this screenshot that much, but for some reason, screen capture and video capture are iffy with PhoneCast.  There is a video of this at the bottom of the post as well.

What was really cool was trying ARCore apps in PhoneCast.  It ‘mostly’ works, and when I say mostly, that is because the viewport is not locked to the head. If you check out the video below you will see what I mean.  Still, VERY cool! I tried the first ARCore app that was released, ‘Atom Visualizer‘ from Signal Garden.   I contacted the good people involved in this project and made a request, we’ll see how it goes.  If they can lock the view port, this would be really fun!  Have a look for the video at the bottom of this post.

Here is a Pro tip for you.  The controller takes a bit of time to get used to, so don’t get put off.  Keep working at it.  BTW, there is not pinch to zoom.  Something I found out on Fallout Shelter.  Hopefully they will find a work around.  I suggested they should map something on the controller for zooming and zoom around the center view.  That could take some work though.

So there you go!  Enjoy.