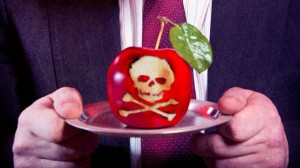 This is not a new story, but most video editors I have talked to really hate Final Cut Pro X (FCPX).  I started using it just as it came out and love and hate it at the same time…  Mostly hate.

My projects are normally not that complicated, and I publish to the web, so my requirements are more consumer then pro at the moment.  For those of you who have use FCP in the past and have looked at FCPX already know there is a laundry list of issues and shortcomings with Pro.  So much so that its really inaccurate to even call this Final Cut Pro.  It really should be called iMovie Pro.  That being said, if you are a consumer/amateur video producer, this could be a good fit. The snapping features is great, love the background processing and in general, its easier for a non-editors to use. Except for one thing… The Bloody Thing CRASHES!!!   A lot.  And its not like I have some old macbook I’m running this on either. My MacBook Pro is pretty beefy with maxed out RAM. (full disclosure, I’m still a PC Tablet Boy for everything else.)

I think once they get some of the bugs out of this thing, and believe me, there are a number, then we could have a nice product here.  But that’s not the end of my complaints.

One other thing that really annoys me in FCPX is that sooo much has been cut from the product that its rendered only useful for the consumer.  Heck, you have to pay extra just to re-size the a movie down.  Are you kidding me?  Uploads to vimeo?  Nope, not quite working yet.   Sigh…

For the time being, I’m switching over to either Avid or Premier.  Again, since I do not have heavy video production demands, I may go Premier.  However, will I ever switch back?  We’ll see.

I think its pretty clear Apple has decided to drop the Professional Video editing market all together and focus just on the consumer and perhaps prosumer market instead.  This will allow it to build a lighter weight program with optional features to keep the costs and hardware demand down. From a business perspective, this might make sense, but I know one thing, I would take a very care look if I was to trust anything on the professional level with Mac in the future.

So what triggered all this was a post I read on arstechnica.com.  If you have not already made a decision on FCP and do video editing, you may want to give this a read and gauge at what level of video capability you need.  Just home movies or little side projects? You should be fine.  Anything else, you may want to look elsewhere.