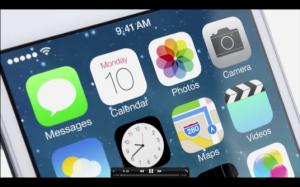 The rumors were true. Apple has finally overhauled its UI; and it looks like a combination of Metro and flaticons (Jailbreak).  I guess that says something for the Metro design approach. The redesign is cleaner and more efficient, but somehow it just does not sit well.  It feels like its trapped between Metro and the old iOS design. Time will tell.  Funny thing is, I already have flat icons.  Via jailbreaks flaticons.  Behold! 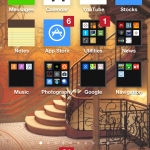 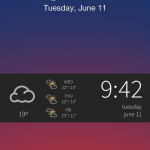 However, as a long time Jailbreaker, I just could not help but feel a bit bored by it and at some points insulted that Apple did give credit to the Jailbreaking community for some of the functions they introduced. The most glaring example is the control center window.  Or better known to use jailbreakers as SBSettings. 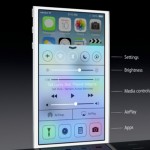 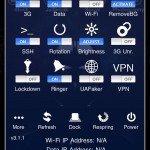 I’m a bit surprised its taken this long to finally get a quick access setting page, but better late then never.

Although the new interface looks different, nothing fundamental has changed.  You still cannot upload your own design themes, you still cannot change how many icons are docked at the bottom, or add a second row.  No animated backgrounds, no alternative login designs.  Bah.

I did say that much of the Apple iOS7 UI feels like Metro.  And credit to zhenghaox who has provided some nice screenshots that really brings this home.  I liked the Metro approach from day 1.  In fact, I use it as a design guideline in my day job.  But something feels cartoony about Apples execution.  Something I not have figured from Apple.  I guess I need to hold it in my hands before I comment too much about it.  You can only get a limited impression of a UI from photos.

All in all iOS7 just feels like another update.  The sharing features do not impress me that much, I like the minor changes around the camera and really like the WebOS/Windows multitasking.  Also like how they are working to be more efficient on battery and net work usage.  Funny, I think what I’m most excited about is having deeper integration into my future car!  But then Microsoft as been working that angle for awhile.

The new safari is nice.  They did a good job taking advantage of every inch of screen.

I think the one feature that would temp me to make me to stay with the iPhone is the new security feature.  I cannot understand why not ALL phone makers have not done this from the beginning!  Buy making a stolen iphone worth less money ( to almost worthless ) that means my phone is less likely to be stolen.  That is a big appeal to me. Bigger then anything I saw from the #wwdc iOS7 announcement so far.  This is something you simply cannot do within a Jailbreak.  At least as far as I know. 🙂

All in all, iOS7 is a nice update for jailbreakers, but nothing that I think makes us willing to update and lose our jailbreak.  Now we just need to wait for iOS7 to be jailbroken. 😉