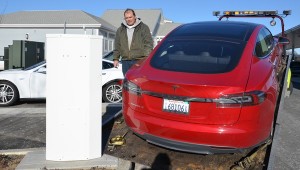 Tesla being loading onto a flat bed. From the NYT

So, like any story, there seems to be 8 sides to this coin. As I just wrote about a few hours ago, Tesla’s founder and CEO Elon Musk claims that the Article written by John Broder in the New York Times claiming that the Tesla Model S was not matching claimed range and in fact left him stranded and needing a tow truck, were not true and that in fact, John purposely under charged and under reported the load he was putting on the car.  Having read both sides now, I think I slightly falling on Tesla’s side here. Although I there there are some point that John defends successfully, I have a hard time someone who is suppose to be so seasoned in reviewing cars can claim such ignorance on basic driving points much less understand how to properly drive an electric car.

{Update}  CNN decides to try the same route. Not a single issue.  Waiting for them to publish.

Well, seems John has replied back and says Elon’s points are a load.  However, Elon did a good job and taking John’s article apart point and point and backed it up with data.  Now John has replied… Point by point.  As follows…

Here are point-by-point responses to specific assertions Mr. Musk has made:

• “As the State of Charge log shows, the Model S battery never ran out of energy at any time, including when Broder called the flatbed truck.”

The car’s display screen said the car was shutting down, and it did. The car did not have enough power to move, or even enough to release the electrically operated parking brake. The tow truck driver was on the phone with Tesla’s New York service manager, Adam Williams, for 15 or 20 minutes as he was trying to move the car onto a flatbed truck.

• “The final leg of his trip was 61 miles and yet he disconnected the charge cable when the range display stated 32 miles. He did so expressly against the advice of Tesla personnel and in obvious violation of common sense.”

The Tesla personnel whom I consulted over the phone – Ms. Ra and Mr. Merendino – told me to leave it connected for an hour, and after that the lost range would be restored. I did not ignore their advice.

• “In his article, Broder claims that ‘the car fell short of its projected range on the final leg.’ Then he bizarrely states that the screen showed ‘Est. remaining range: 32 miles’ and the car traveled ‘51 miles’ contradicting his own statement (see images below). The car actually did an admirable job exceeding its projected range. Had he not insisted on doing a nonstop 61-mile trip while staring at a screen that estimated half that range, all would have been well. He constructed a no-win scenario for any vehicle, electric or gasoline.”

Tesla is correct that the car did exceed the projected range of 32 miles when I left Norwich, as I was driving slowly, and it gave me hope that the Tesla employee I’d consulted was correct that the mileage lost overnight was being restored. It wasn’t enough, however, to get to Milford.

• “On that leg, he drove right past a public charge station while the car repeatedly warned him that it was very low on range.”

I drove normally (at the speed limit or with prevailing traffic) when I thought it was prudent to do so. I do recall setting the cruise control to about 54 m.p.h., as I wrote. The log shows the car traveling about 60 m.p.h. for a nearly 100-mile stretch on the New Jersey Turnpike. I cannot account for the discrepancy, nor for a later stretch in Connecticut where I recall driving about 45 m.p.h., but it may be the result of the car being delivered with 19-inch wheels and all-season tires, not the specified 21-inch wheels and summer tires. That just might have affected the recorded speed, range, rate of battery depletion or any number of other parameters. Tesla’s data suggests I was doing slightly more than 50 over a stretch where the speed limit was 65. The traffic was heavy in that part of Connecticut, so cruise control was not usable, and I tried to keep the speed at 50 or below without impeding traffic.

Certainly, and as Tesla’s logs clearly show, much of my driving was at or well below the 65 m.p.h. speed limit, with only a single momentary spike above 80. Most drivers are aware that cars can speed up, even sometimes when cruise control is engaged, on downhill stretches.

I raised and lowered the cabin heat in an effort to strike a balance between saving energy and staying somewhat comfortable. (It was 30 degrees outside when I began the trip, and the temperature plunged that night to 10 degrees.) Tesla jumped to the conclusion that I claimed to have lowered the cabin temperature “at 182 miles,” but I never wrote that. The data clearly indicates that I sharply lowered the temperature setting – twice – a little over 200 miles into the trip. After the battery was charged I tried to warm the cabin.

• “The charge time on his second stop was 47 minutes, going from —5 miles (reserve power) to 209 miles of Ideal or 185 miles of E.P.A. Rated Range, not 58 minutes as stated in the graphic attached to his article. Had Broder not deliberately turned off the Supercharger at 47 mins and actually spent 58 mins Supercharging, it would have been virtually impossible to run out of energy for the remainder of his stated journey.”

According to my notes, I plugged into the Milford Supercharger at 5:45 p.m. and disconnected at 6:43 p.m. The range reading was 185 miles.

I stopped at 72 percent because I had replenished more than enough energy for the miles I intended to drive the next day before fully recharging on my way back to New York. In Norwich, I charged for an hour on the lower-power charger, expressly on the instructions of Tesla personnel, to get enough range to reach the Supercharger station in Milford.

• “The above helps explain a unique peculiarity at the end of the second leg of Broder’s trip. When he first reached our Milford, Conn., Supercharger, having driven the car hard and after taking an unplanned detour through downtown Manhattan to give his brother a ride, the display said “0 miles remaining.” Instead of plugging in the car, he drove in circles for over half a mile in a tiny, 100-space parking lot. When the Model S valiantly refused to die, he eventually plugged it in. On the later legs, it is clear Broder was determined not to be foiled again.”

I drove around the Milford service plaza in the dark looking for the Supercharger, which is not prominently marked. I was not trying to drain the battery. (It was already on reserve power.) As soon as I found the Supercharger, I plugged the car in.

The stop in Manhattan was planned from the beginning and known to Tesla personnel all along. According to Google Maps, taking the Lincoln Tunnel into Manhattan (instead of crossing at the George Washington Bridge) and driving up the West Side Highway added only two miles to the overall distance from Newark, Del., to Milford, Conn.

Neither I nor the Model S ever visited “downtown Manhattan.”

• “When I first heard about what could at best be described as irregularities in Broder’s behavior during the test drive, I called to apologize for any inconvenience that he may have suffered and sought to put my concerns to rest, hoping that he had simply made honest mistakes. That was not the case.”

Mr. Musk not only apologized, he said the charging stations should be 60 miles closer together and offered me a second test drive when additional stations were built.

So what can we derive from this?  Its a he said, she said, but so far, Elon is the only one speaking with data. I would like to hear from some other people john has interacted with for some collaboration.  Then we have evidence vs evidence.  Someone call Sherlock Holmes