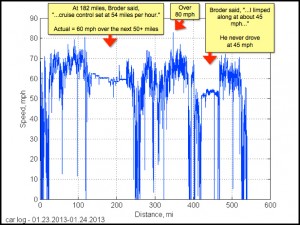 I’m already in the market to buy an electric or extended hybrid so I tend to pay attention to these story more then most people. Now, I do not exactly consider the New York Times the go to publication for news on electric cars, however, like most people, I normally accept anything I read in the NYT as reporting that is normally held at the highest standards.  Thus when I read about Elon Musk taking up arms against a poor review from a NYT reporter on poor review of their model S, I decided to check into this a bit more.  What I discovered is two things, I cannot trust the NYT, at least anything from John M. Broder and second, the Tesla model S has really great data collection!

{UPDATE}  We have a response from the NYT.  Reading it now..

In John’s post titled Stalled Out on Tesla’s Electric Highway, he claims that the range of the Model S is so bad, that he had to turn down the heater, drive at 54 and at one point call for a tow truck.  Now here is the funny part, data logging was turned on the test car he was giving and it was MORE then clear, they John did everything just short of disconnecting the battery cables to insure the car would not perform up to standards.  In the past, there would have been no way to ever know what really happened, so you have to take the reporters word and the fact they are with the Times, you would think you could depend on that word.  Well clearly not!

Elon wrong a repost post titled A Most Peculiar Test Drive where he take apart John’s post point by point using data collected from the car directly. Lets have a look taken from Elon’s post…

Here is a summary of the key facts:

As you can see, its more then clear the Broder had an agenda, or he is pretty clueless about electric cars, either way, the evidence is pretty damning.  I have yet to hear anything from NYT about this.  I would expect a retraction at the very least as well as Broder getting canned. That or perhaps all this data that Elon is releasing could itself be fabricated, but right now, the evidence seems to be pointing to bad reporter. I’m REALLY interested to hear John’s reply to this. But if Elon’s data is correct, the what is really concerning is someone would go to such extents to make an electric car fail in a test.  Makes you wonder if either he does not understand electric cars or he has an agenda.  Elon wondered that as well.

We assumed that the reporter would be fair and impartial, as has been our experience with The New York Times, an organization that prides itself on journalistic integrity. As a result, we did not think to read his past articles and were unaware of his outright disdain for electric cars. We were played for a fool and as a result, let down the cause of electric vehicles. For that, I am deeply sorry. 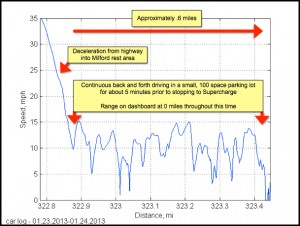 However, this is only one aspect of the story that I find interesting.  When you look at the data, it’s really interesting.  If the day ever comes I can afford a model S, I would want every little bit of tracking turned on.  I want to know charging, power consumption over various movement attributes; acceleration, cruise regenerative breaking, 220v vs 110c charging, etc… During a visit to the Tesla plant when I first saw the very first Model S still in build, I was enticed by the large table display in the car. I would LOVE to have this detailed data right there on the screen. I do remember asking if there would be an SDK so coders could write apps for such things.  I was told; ‘Perhaps… “.

One thing you may notice is the graphs are pretty rudimentary. I would LOVE to redesign this and write a more intuitive and dynamic display where drivers like me can see instantly how my driving habits affect positively and negatively on the cars performance.  I remember I rented a Prius last year and loved playing with it as I drove, trying to squeeze every amp I could.  I think all electric cars should have super detailed data, not just ones turned on for reporters.

Given all the data cars are collecting now, not just electrics, when should we be worried about our privacy?  I have no issue with it, but I bet you a tonne that John’s does right now.