I was made aware of this post on VentureBeat yesterday, PAR Works ushers in the maturity of augmented reality, and immediately got captivated by the title. As a person in the field, I have seen how augmented reality has been out in the mainstream for a few years and the AR experiences now don’t seem much different than when everyone got the AR bug a few years back. With this VentureBeat post am I going to learn about a company that has solved some of the problems the existing big AR providers have not yet? How are they ushering in the maturity of AR?

Well it seems that this is not the article that I thought it would be. PAR Works states from their website, “Unlike other augmented reality systems, virtual overlays created in PAR Works aren’t just tied to a geographical coordinate. Since our technology leverages advanced image recognition techniques, overlays can be tied to a specific window on the side of a building, a particular knob on a car dashboard, and more. As long as your images are sufficiently detailed, overlays can be placed with a high degree of accuracy on just about any man-made object, from buildings to engines to remote controls.“ 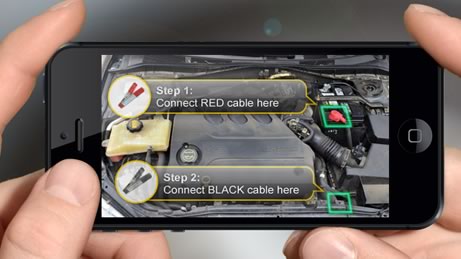 The concept is cool and I was pleasantly surprised that they have a demo of it being used in the construction industry, which makes sense given one of the Virginia Tech labs the research came from, but to say this is what will usher in the maturity of AR, I am not quite sure. Yes it is just a title to get one to read it and obviously it works, but for some reason I am bothered by it.

First it sets the bar rather high for this young company. Yes the different research departments at Virginia Tech do amazing work that constantly wows me, but is this research turned business really ushering in the maturity of AR? PAR Works states that advanced image recognition needs sufficiently detailed images. Granted I am no expert on image recognition, but from what I have learned from those that work in the field, there are a number of things that can affect this from working properly. How does it handle different lighting, shadows, things that obstruct the whole picture like cars on a street, different times of year that produce different detailed images because of the loss, addition, or color changing of foliage, and a number of issues that I know create problems for companies big and small?

Second, from the company videos it looks like the AR they deliver is more interactive images than adding interactivity to a live view. I saw the app scanning a real world object or scene and placing annotations and interactive elements to the proper location on an image, not a camera feed. This is augmented reality but as similar to what the other AR companies are doing with geolocation and/or image recognition using a live view as indoor soccer is to outdoor. It’s in the same family, but not the same.

Finally, I am curious about the company itself. “We just announced a developer competition for $25,000,” said Serafini (CEO). “Our platform is complete and available for developers to build upon. For the next couple of months we’re gonna take a hard look and watch what people are building on top of our base technology. We want to see the traction we’re able to build. That’ll help dictate to us where the business is.” This is a very cost effective way to get a lot of ideas and help identify ‘where the business is’, but do we need more AR technology looking for a solution?

Regardless, I recommend a visit to the PAR Works site and try the demo. I do plan when I get a free weekend to join their developer program to see what the platform can do. It deserves a proper writeup after a hands-on review and not just a reaction to another’s post. Don’t want to throw the baby out with the bathwater just because I don’t like what someone else says. That just wouldn’t be mature.