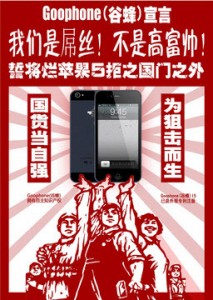 This is gold. Announced last week, the Chinese manufacture GooPhone decided to take all the iphone 5 rumors out there and create that phone.  However, instead of running iOS on this, they would run Android.  Now this is funny enough, but it seems that since Apple did not patent the iphone 5 specs yet, GooPhone is suing Apple!  Oh man.  Karma’s a bitch!

In case you missed it, GooPhone created a real function Android 4 phone called the GooPhone i5. (cool eh? Check the pic at the end of this post.) that matches the iphone 5 specs. No word on the docking connector though.  Would be so funny if they match that as well. Now what is really funny is when you look at the advert to the right, its using what looks like an iPhone login.  They are really pushing it aren’t they?

Ok, ok, the odds of this holding up anywhere but China are pretty weak, but who knows?  With Chinese law this could actually happen.  Hey, they made the phone first!  Thus when the iphone5 comes out, its a ‘copy’ of their phone!  Seriously! And it not like this has not happened before.  Remember the Chinese company Proview?  They successfully sued Apple for $60 million for infringement on the name iPad.  So why not?

Now would GooPhone try to file in the US and other countries?  Why not?  Nothing to lose really.  The iPhone 5 does not come out till the 12th, so there is still time to do a Edison run to the patent office. 🙂

In case you still have not see the actual phone, here you go.  Your welcome. 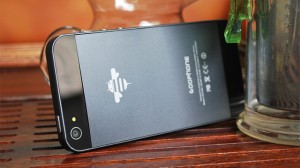