The Kin was DOA for almost everyone who reviewed it.  It was basically a low feature, low capability smart phone that was not that smart, nor much of a phone, and yet still had the same cost of a phone. 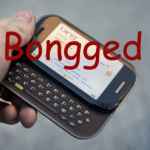 You HAVE to imagine that even the brain dead at MS mobile knew this was a loss leader.  I don’t think they were ever that committed to the kin.  Instead what I think they were really interested in was on the online integration effort, and from what little I have seen of it, its an interesting effort.

I have the new samsung bada phone and they have made a very nice effort in integrating socMed messages with email and contacts to provide a single experience.  The MS Kin site is a bit like that but with multimedia streaming included.  An interesting effort.  And you know that is what we will see in Windows 7 mobile.

Still, that is a LOT of money and lost reputation to test out a market idea.  But this is Microsoft, they play the long game and do not feel worried about trying 1 2 or even 3.11 times to get something right.  But the question we have to ask is; in a world where Apple and Google (with exception to wave) tend to get it right the first time, can MS afford to be so obtuse?