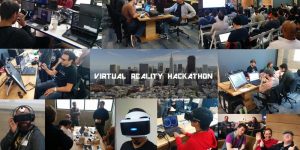 Here we go. Another VR hackathon happening in SF (Microsoft Reactor 680 Folsom St Ste. 145 San Francisco, CA 94107) I expect lots of Vives, Oculus and GearVR’s.  I should not have to explain to you dear readers at this point what a VR hackathon is.  BTW, the site says its sold out, but its not, use the RSVP link and/or show up either Thursday at the mixer at Razer’s SF office (201 3rd St #900, San Francisco, CA 94103) or Friday at the Reactor.  Sign up VRHackathon here.

I will stop in at some point on Thursday, but I will be there on Friday and Sunday when I will judge the best GearVRf project.  Oh, what is GearVRf?  In short, its an open source project to allow the creation of VR worlds using Java.  Prizes?  Of course!  (5) Gear 360 cameras will be given out.

Will there be devices we can use?  I plan on bringing 10 GearVR Note 4 devices.  Yea its an older device, but it works fine for hacks.

The Gear VR Framework (GearVRf) Project is an open source collaboration based on the GearVRf open-source rendering library for application development on VR-supported Android devices.

Now some details for the SF VRhackathon.

Its in San Francisco be held at Microsoft’s Reactor space, an interactive and modern office located just minutes from the Moscone Center and Powell BART station.