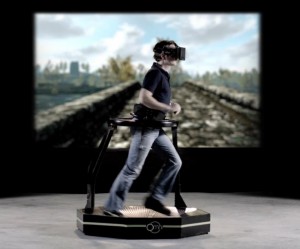 A LOOOONG time ago when I was at UC Berkeley studying computing in Architecture, my focus was on virtual environments.  During my research I was downhearted to find a flaw in what we all thought was the soon approaching golden age of VR.  VOR ( Vestibulo-ocular Reflex: explained at the bottom of the post) is a form of motion sickness many people get when using head mounted displays who have trouble adapting VOR gain. Once can train themselves to adapt and improve VOR gain, however there will always be a disconnect between what the eyes see and the body is sensing.  Even those like myself who have long adapted to using HMDs still can only maintain existence in a hyper-dynamic virtual environment for so long.   One way to get around this issue is to fool the body into thinking it is sensing the same thing the eyes are seeing.  During my research, I tried a few things and the two that showed the most promise was placing subjects in a wheelchair and forcing navigation using only the chair, and the second was to allow the subject to walk around with the HMD. As you can imagine, the wheel chair had its limits and constantly trying to hold the cables and limit how far someone could walk was not sustainable.

I reasoned that what we need to is a ‘pod’ where the floor base was made of small wheels and the waist was restricted by a harness.  This will allow the subject to simulate walking and turning thus allow more of the bodies haptic feedback loops to agree with what was being seen in the HMD.  Although VOR gain adaption would still be needed, the adaption time would be greatly reduced, and the in VR sustainability time extended, as I discovered with my work on the chair and allowing free walking. However, I never could build such a device because of cost.   But now, someone has figured it out. 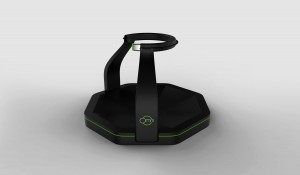 Originally starting out as a kickstarter project, the ‘Omni‘ is an improved version of what I designed back in the 90’s.  Instead of using rollers, a grooved curved plastic bowl is used with sensors. (older version uses an xbox sensor)  These sensors can translate movement and direction to the game. Paired with the new lightweight Oculus, the user walks normally and turns normally.  Admittedly it does take a little bit to adjust to your feet slipping instead of the force feedback with normal translational movement, but the connection between body mechanics and spatial perception is synced enough that adaption happens quickly. The rig itself is $499, quite affordable for most serious gamers. What is exciting about this we might be seeing the beginning of the next level of maturity around VR that was stunted in the 90’s. With inexpensive but capable HMDs and now inexpensive VR motion platforms, we can make that next leap in immersive gaming. 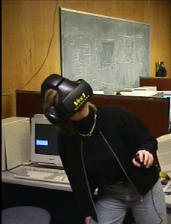 Despite the commonality of simulator sickness, little is known about it.  The most common source of simulator sickness is Vestibulo-ocular Reflex (VOR); The vestibular apparatus is a small structure that exists in the bony labyrinth of the inner ear, whose function is to sense and signal movements of the head. This function is extremely important because it contributes to the coordination of motor responses for the body.  VOR is the fundamental eye-movement reflex that functions to keep images stabilized on the retina during movement of the head, thus helping to perform a very basic but important function, to allow sight during movement. The disagreement between what is seen by the body and what the vestibular apparatus senses can cause confusion, providing disagreeing signals to the brain and thus inducing sickness.  VOR can adapt its signal to the brain when the environment demands it, but not everyone has the same VOR adaptation ability.  This inability to resolve vestibular and ocular discrepancy is a major contribution to simulator sickness.  The greater lag time between screen position updates and vestibular sensation can accelerate simulator sickness even more.