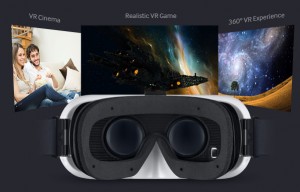 Gear VR, the only way to fly.

I took two plane trips in the last 2 weeks and decided to see what level of utility the gear VR would be on a flight.  Not only was it great, it totally changed the flight experience. In this post I’m going to list my favorite VR apps for flying and WHY it was so much better.

First, lets set the stage. Most of the time when I fly, I do not get to fly first class and often I’m sitting behind someone. short continental flights means I’m crammed into a small seat, with little leg room and even LESS room for my laptop if the person in front of me decides to recline back… which is often.

So here we are in the little space, unable to work comfortably and if you want to watch a movie you have those little screens in the headrest in front of you or worse a large screen somewhere on the ceiling.  Not the best experience.

Now lets introduce the Gear VR to this situation.

We already know that by putting on the HMD we would find my ourselves immersed in a virtual reality.  Whats great about that is almost all the VR immersion take you to a space that is FAR larger then the little seat you are sitting in.  Add good headphones and you are fully isolated from crying babies, people opening and closing blinds, and the person in front of you trying to recline into your lap.  Even though I knew this would happen, the effect and relief was beyond expectations.

Although the Gear VR is not perfect, and you have to deal with cooling and power issues, I found I was able to stay in the HMD for multiple hours per session.  On my flight to Spain I watched Star Wars IV.  Using the oculus theater mode, I started the movie using the cinema setting, making me feel I was in a large empty space.  After about 15 min I switched to ‘void’ mode and did not lose the feeling of watching a large screen TV in a large comfortable setting. BTW, helpful hint here; to maximize the battery live of your s6, turn down the brightness, stay in airplane mode and use ‘Void’.  The void setting will help reduce demand on the system to render all those polys that make up the various movie settings.  Also, turn on the air and have it blow on you.  It will cool the phone, and you, and help with fogging.

One issue, well two issues I’ve found is the movie tends to drift over time and I have to recenter it.  Annoying.  Also when the plane turns I have to recenter.  Its not a big enough issue to stop me from watching movies, but hopefully they will find a fix for this.

A common question I was asked is; can I play any movie?  Yes.  As long as its in a mp4 or other supported format, you should be fine.  If you place the file in you ‘movie’ folder it will find it.  You an use MilkVR too.  Create a folder called “MilkVR” and it should find it.

I preloaded a few movies, some TV episodes and few random video’s I shot. Worked great.

Now on to games.  Here you need to be a bit more selective.  Remember you are sitting in an airline seat and can only turn your head somewhat.  ALSO remember you might have someone sleeping next to you so lots of turning to see 180, which means you have to often turn your shoulders could be out of the question.  So get games where all the action is not more then say 160 fov.  My absolute favorite game, Bandit six o’clock, is around 120.  Perfect.  So if needed play your game a little before the flight in a ridged chair.  Many games lose their essence if you are not in a swivel chair.

Next, try to be sure your game uses the gamepad.  If you game only works on the HMD trackpad, then either make sure you get the window seat or the person sitting to your right is quite tolerant because odds are you might smack the with your elbow.

Finally, spend the money and get full games.  Remember, you are trying to kill time up there and a demo is not going to last.

There are a few games I like but NOTHING come close to bandit six o’clock, and even MORE so when flying.  The game is simple.  You are a tail gunner on a WW2 Lancaster.  Enemy plans are trying to get behind you to shot you down.  What is so great about this game is the game play is actually a bit more sophisticated then it sounds.  Also the immersive effect is amazing for a game.  Unlike most of the games I play I really sense the dimensionality of the airplanes when they are flying in.  Its even more believable when you get a bit of turbulence on your flight!  I played this game for 1.5 hours TWICE! and for an hour on the Spain trip.  I only stopped because of the phone overheating or I was interrupted for one thing or another.

* Plugin earphone or nice a nice headset.  BRING it! shutting out outside sound is your friend.

* Bring back up power.  Although most flight has AC or DC, not all of them do.  Be prepared.

* Bring a cigarette DC adapter.  My section had a DC socket; I got lucky that I asked the flight attendant right away and got one. I may not get so lucky next time.

* Keep your jacket on and turn the air full blast.  You need to keep the phone as cool as you can.  I have actually hacked a small cooling fan for my Note4 and working on a s6 version now.  I’ll post the these modes when I get time. This is really important, the hotter your phone get the less efficient everything is, including the battery, and at 35,000 feed you need to save power where you can.

There are a number of other apps I played on the flight I did not talk about but the main point is the VR helmet as an escape from a small airline seat was extremely successful. As such I will never fly again without my Gear VR.  And if you have a fear of flying, or hate small places, this is for you!