The object is to match ice cream scoops of the same color by firing them from a moving truck, and watching them vanish in a shower of particle effects. Each level is completed by collecting all the cherries, and performance is graded from 1-3 stars depending on how many rows remain onscreen. There are 90 levels in total, and later levels include powerups, hazards and obstacles like bombs, color-transforming scoops, and freezer-burned ice cream. (see YouTube trailer here).

Bubble Scoop is polished and kid-friendly, and from experience I can say that the soundtrack will be stuck in your head for days. It includes achievements in Game Center (iOS) and OpenFeint (Android), so players can compete worldwide.

The game is currently available for $0.99 in iTunes as a universal app for iPhone, iPod Touch and iPad, and in Amazon’s Appstore for the Kindle Fire tablet and other Android devices. 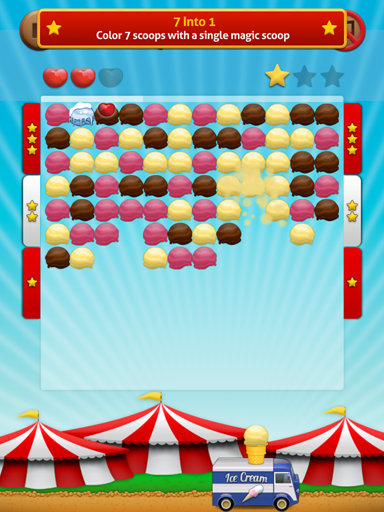