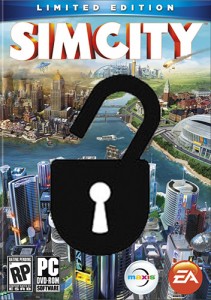 And so they have finally released SimCity in offline mode.  Well, its not out yet, but SimCity Offline is being tested at the moment.  Looks like they have it right.  You can play offline by yourself, you can install mods and save your games without ever touching the cloud.  Here is a snip from the official announcement.

Offline is coming as a free download with Update 10 to all SimCity players. When we launch it, all of your previously downloaded content will be available to you anytime, anywhere, without the need for an internet connection. We are in the late phases of wrapping up its development and while we want to get it into your hands as soon as possible, our priority is to make sure that it’s as polished as possible before we release it. … In Update 10, you can still play solo in Regions on your own, or in Multiplayer with people from around the world. What’s new is the Single Player Mode, which allows you to play the game Offline by yourself. And because your saved games in this mode are stored locally, you can save and load to your heart’s content. Our team will be delivering a follow-up blog that will outline the full details in the near future so stay tuned.

Now what happened to all those statements that SC could ONLY work in the cloud?  Well, they seem to have fessed up that it as just for storage and network games features.  The comments from the post have your normal rants, but I thought this was interesting.

The original algorithms for the agents were traveling salesmen like algorithm which could only be calculated by throwing immense amounts of ram at them as well as general processing power. This is also what caused mass crashes early on in the games launch is the algorithm’s literally consume all of (even a supercomputers) power and thus the game would do that fantastic little cascade crash grinding to a slow halt. The new easier to calculate algorithms can be done on about any computer but at the expense of stupid traffic and stupid agents resulting in some of the glitchey messes we have seen recently that they’ve slowly been programming minor variations into the agents algorithm’s to remedy. This game has been one MASSIVE experiment in the world of planar graph theory and computations on them.

I’m have no idea how true this is; but I remember when the first hacks came out to allow people to play offline, they were not having performance issues, so I have to question this. But again, I did not do it myself.  However, my thinking goes along with this comment.

Some people would rather just believe the lie.

We had SimCity running just fine, offline, within weeks of launch. We could even crack the tiny plot borders. Just couldn’t save. From debug mode, to the offline timer, to getfudgedpopulation, to “its not drm its an mmo,” to the BS that only fooled those who wanted to be fooled. SimCity was the most /popcorn worthy video game train wreck since Vanguard.

I actually bought SimCity right after launch because I couldn’t believe EA Maxis could screw up Wright’s vision up as much as everyone was saying they did. I was wrong. Only this story popping up on reddit got me curious enough to come back and see what Maxis was trying to spin now. Its nice that a Lucy-less Maxis is still plugging away at SimCity.

Pleasantly surprised EA has not shuttered the studio completely. But anyone thinking that finally letting me save my games on my PC is going to magically rebuild all the bridges they’ve burned? Well, some will believe anything now, won’t they.

Regardless, now that offline is coming, I will look into buying a copy.  Something I never thought I would say.