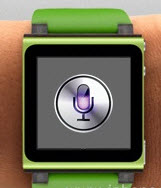 This is an older rumor, older as in 2 weeks ago. (iphone4jailbreak.org) Seems Apple is working on an adding Siri to the ipod Nano such that it can work as a watch / personal communicator.  Imagine having a watch that is mostly controlled through voice and performs voice to text for output..

I’m sure it’s mostly a rumor, but sometimes a rumor is all that is needed for someone at Apple to say, ‘well why not?’  And this is one of those.  Remember when the ipod nano first came out?  It was not Apple that came out with the very cool idea of making a watch out it. (Although I’m sure someone must have thought about it.)   So why not put Siri on it, make the voice to text a bit more sophisticated and you’re there!  The only reason you cannot do it now is that the hardware is not powerful enough to run Siri, but that is addressable with current technology.  Just a price issue.

I think a more power voice nano would be a good seller, especially given the recent efforts by Apple to make all devices connect to each other.  I can totally see being out and about, or driving, or biking or heck, when you just do not feel like reaching for your phone or fishing it out of your pocket.

BTW; better get a move on.  There are other smart watches out there.. like the Pebble Smart watch which I bought.