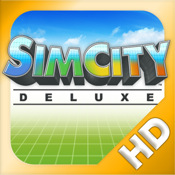 I mostly play SimCity deluxe on the iPad now, but these tips apply for all SimCity games in general. BTW, I have not tried this for Android, but it should work.

Have other tips, let us know.