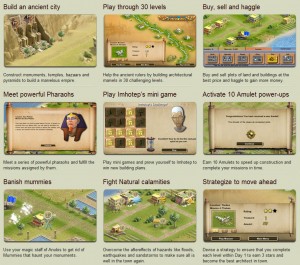 I just saw this now come through the normal press release wires and thought I would toss it on the site.  I have not tried Empire Builder and thus have no idea if its any good, but the graphics look nice and if your into Egyptian history at all, this could be pretty fun.

Empire Builder allows the player to become one of history’s best architects and raise
an ancient empire from the sands. In the game, players will meet a series of powerful
pharaohs and help them in building an empire along the lush Nile River. In 30 fun
and challenging levels, players will not just construct some of Egypt’s most famous
monuments but also experience the rise of an ancient civilization.

“Empire Builder is an excellent building simulation game that gives players a taste of
the Egyptian heritage”, said Anila Andrade of 99Games. “The game also educates the
players on different kinds of pyramids and monuments as they build them in historic
locations in Egypt”, she added.

Key features of Empire Builder are:

Empire Builder provides the first 6 levels for free, and allows you to download
additional levels through In-App Purchase.