Gezz.  Things move so bloody fast.  I think we all expected the ipad2 to be hacked and jailbroken pretty quick, but it did not even take the weekend to crack this nut.   The hacker Comex, who also did the userland jailbreaks Spirit and JailbreakMe, has released tweets and a video showing an ipad2 running cydia.

@comex: would’ve had it yesterday if I didn’t have to spend 1.5 days looking for a replacement exploit (which came from a most unexpected place…)

@iphone_dev: Congrats to @comex for jailbreaking yet another brand new device (iPad2) while 2500 miles away from it!

As you can see in the image below, its running cydia.  Why jailbreak the ipad2?  Really? Your still asking that? … Have a look at these two links..

No word on when it will hit the wild. 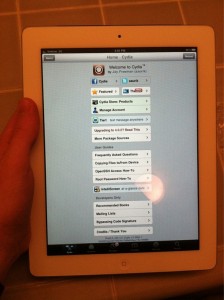