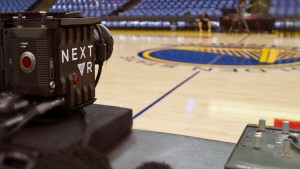 So it finally happened.  We got to see a major game, live, in VR.  I wish I could say it was great, it wasn’t, but it was good enough to MORE then prove that live or even post broadcast games in VR have amazing potential, and I waiting with money in hand.

First, what went wrong.  Only 3 things really.  The stream was not strong enough to keep up with the action.  When the players were mostly standing around, it felt like the feed could hold about 25fps.  However, once the movement started to increase, the compression would be reduced and soon I was watching 15 and even 10 fps.  That’s at least when it does not lock up on me.  (To fix, I simply restarted the app)

Second, WHY in the world are we sitting so damn low?  And ‘thankfully’ someone told the camera guy to move after the half.   Really, its a camera.  Get me court-side and 8 feet up.  Also I understand the issues with trying to cover a large court with one camera, but you can zoom in a little bit more.  I don’t mind moving my head a bit more.  The players looked so small, combined with poor frame rate, I thought I was watching a video game. 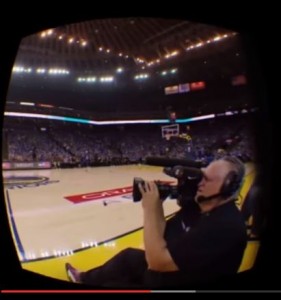 Finally, announcers and scores.  There should be an easy way to get that feed synced and a simple 2D overlay.

Now the good parts..   For all its limitations, it was a FANTASTIC taste of what is to come.

It was nice to look where I wanted to look and really feel the pace of the game.  I did not feel ‘there’ but I could imagine now what it will feel like.  In other words even though the NBA tip off was not a ‘immersive’ experience, it was close enough that I know what it CAN feel like and I want it even more!!

The other key takeaway is the issues I listed above are not that hard to fix. Once we have 4k screens; partner with a company with a better compression algorithm, get the camera off the floor, add some voice and data overlays are we are at v1 for live VR sports.

BTW, phone overheat was still as issue.  It was easy enough to fix by simply turning on a fan and putting on a sweatshirt, but the demands of a 4k stream will push the hardware even harder, so for now keep a fan nearby.  If you do not have that option, turn off everything but the wifi and bring the brightness down a bit.  It will help a lot.

And why did we not have the option to watch this on oculus?  Yes, its WAY better to have a mobile device so I could watch it where I wanted to, but if I could get better performance out of the oculus or the vive, why not offer that?

All and all, good job at the first test.  I know it will get better and better.