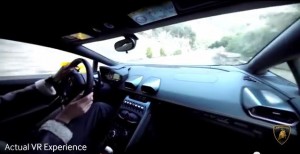 Well I finally got to see it today and its more than just a camera in the car.  This video was very well planned out and shots in the garage, drive by while sitting in a cafe, helicopter shots.  But lets break it down a bit before I talk about it further.   Here are the things I look for in a good 360 video.

* A good story.  Just like anything, no matter how well you shoot a video, if no one cares about the content, you will lose them.

* Stable video platform.  I cannot stress this enough.  I was really excited to see the burning man video but the wind kept moving the camera around and after awhile I had to stop watching it because I was getting sick. The biggest hurdle to VR content consumption is motion sickness.  The best way to fight it is to have a VERY stable camera that does not move or at least moves very smoothly with image stabilization along with great head tracking.

* High quality video.  I cannot count how many videos I started to watch and abandoned because the quality was too low.  The next gear VR will run on the G6 which is suppose to have an even better screen then the Note, so screens are getting better, video need to be able to keep up.

So how does the Lamborghini 360 VR video compare to the three points above?  Wins on all three.

The video is in 3 parts so give it some time to download.  Be sure to use ear phones because hearing this on the phones speakers will lose some of the effects.  The video story is simple enough.  The driver is having coffee in a resort town. (Italy?) alarm goes off and he walks outside to a waiting Lamborghini Huracan.  From there we are placed at various locations to watch the car drive by.  Now this may seem silly but its great because the camera is perfectly still.  You get a sense of setting and how well this beautiful car looks and sounds as it drives through the picturesque Italian hills.  The video quality is excellent and the directing was stunning. Remember, this is a selling tool, not a VR driving application. Eventually we arrive at the garage as they prep two cars for the track.

At this point we are now driving along in the car. The image is rock stable even though we are racing around a track. (I’m guessing some really high quality image stabilization was employed). Despite the high speed and constant turns, I did not feel too uneasy so I could continue to enjoy the film.

As with any VR video that has movement, I can only take it for so long and just as I was feeling this is enough, the film ended.

So if you have the Gear VR, break it out and load up the Lamborghini film on Milk.  Its worth it, but more importantly, it set the bar as to how VR 360 video should be done.

Gear VR users can access on their headsets. Its latest partnership is with the iconic italian car maker Lamborghini. Both companies have worked together to create a virtual driving experience for the Lamborghini Huracan.