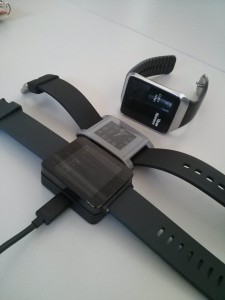 I got the Google LG G watch after Google I/O to try out the new API and if I could implement a push service using my site newssnacker.com.  Simple enough idea, I want to write a protocol that will only send message to my watch when something big breaks.  However, after just 24 hours I realized something; I do not want to talk to my watch!

Seems like a simple thing but when you get used to using buttons on the Pebble and then having to use your voice to do anything with the LG, you feel like its not only silly to have to constantly talk to your watch, but its actually slower; you have to call up the voice app, speak your request (assuming it gets it right the first time) send the sampled sound back to the server which returns the command, then execute the command.  With the pebble, I have a number of little tasks already defined in ‘Tasker” and can get to any one of my commands or installed apps in normally 2-3 seconds by simply pressing a few buttons.  Especially useful is having music control always being available on the Pebble making sending commands to my music app which is voice and eyes free action since I already know what each button does.

I think this can be dealt with by making buttons available on the screen, but you will always have to look at the watch because it would be very difficult to know which button you have selected without looking at the watch.  Not great when you are driving.  Also, I’m not exactly sure, but you may not be able to keep the watch in display mode with a running app, something I have to look into.

I talked to a few other people who have smart watches and all of them agreed buttons would be much better.  There is an app call the mini launcher, that helps a bit, but its not a solution. So what can we do about this?

For now, nothing short of what I suggested above.  But perhaps future watches can have the side touch sensitive.  Imagine the LG or the Galaxy Gear where the sides have areas that respond to touch.  Perhaps laid out like the Pebble.  This should be pretty easy to do technically and I cannot imagine it would add that much to cost.  In the meantime, my next little project may be to make ‘buttons’ on the screen.  Stay tuned.