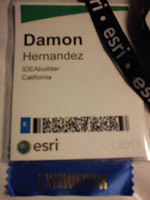 So I just got back from the ESRI User Conference 2013 in San Diego and wow, what a trip.

Founded by Jack Dangermond, ESRI (Environmental Systems Research Institute) is an industry leader and international supplier of Geographic Information System (GIS) software and geodatabase management applications. The company has an installed base of more than one million users in more than 350,000 organizations, including most US federal agencies and national mapping agencies, all 50 US state health departments, transportation agencies, forestry companies, utilities, state and local government, schools and universities, NGOs, and commercial business.

The user conference brought 15,000+ ESRI users from over 130 countries. Keynote presentations included Advisor to the Prime Minister of India on Public Information, Infrastructure, and Innovations Sam Pitroda and an inspiring discussion with pop culture icon Will.i.am. For the record I am a B.E.P. fan but this interview was something else.

This was my first time to attend the ESRI User Conference and I was amazed at the number of sessions, expo size (entire convention center floor), attendance, and diversity of the show. As an attendee pointed out, “GIS is everything” and it seems everything was represented at the event. Among what I saw on the trade show floor were a variety of mapping applications, LIDAR services (remote sensing technology that measures distance by illuminating a target with a laser and analyzing the reflected light) and drone data collection devices.

I am not a geo-specialist but I did recognize a few things I am familiar with. Among those was: 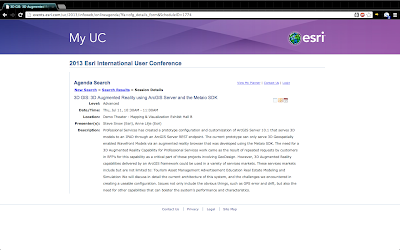 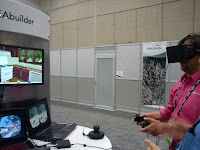 One ESRI invited exhibitor was building company IDEAbuilder. IDEAbuilder uses geospatial data for a variety of uses in the building process and were showcasing a new application the company tech team has built that combines interactive 3D and digital fabrication with some ESRI tools and services. This was a great demonstration of how 2D/3D building data can connect with geospatial data to create highly intelligent interactive scenes. 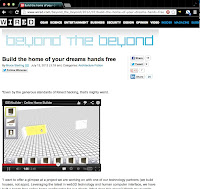 The application that was shown was the virtual reality version of their Performance Shell Configurator or PSC. The PSC application is a green building tool for their builder partners that provides the builder the ability to go into an interactive 3D scene and snap together the shell of a structure from a library of digital fabrication ready components that can be robotically manufactured. These metadata rich components provide their partners with information useful to the building process. I posted several months back the web3D and Kinect version of this app that got covered on Wired.com (thanks Bruce Sterling!)

Some features of our Oculus Rift virtual reality version include Razer Hydra hand controller support, the ability to import a blueprint image to use as a guide to build on top of, a live top down map so you can see where you are on the blueprint, a total structure cost calculator, elevated cherry picker view, a virtual ‘AR’ view where staring at a panel piece displayed part information including cost, and free navigation of a City Engine city that acts as the 3D backdrop to the PSC building space. There will be an official post with more information about the PSC app on the IDEAbuilder site so stay tuned over there.

The application was a huge hit and really helped visitors experience new ways of interacting with data. While most people were unaware of the Oculus Rift or have never had a virtual reality experience before, there were those that were more than ready to get started like John Bormann. In addition to the PSC app, they also shared an Xbox 360 controller controlled architectural visualization Oculus Rift scene created by real life architect, web3D supporter, and IDEAbuilder friend Jon Brouchoud. 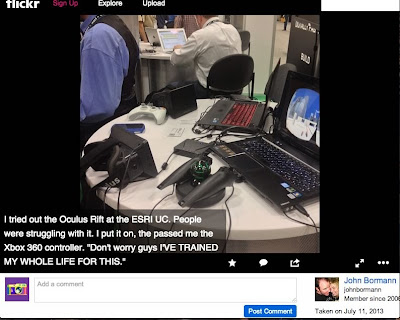 In closing, I would like to thank the IDEAbuilder team for this cool virtual reality experience, everyone I met at the event that helped me understand more about GIS, and the people at ESRI for the opportunity and everything they did to make it a super ‘geospecial’ time. See you next year!