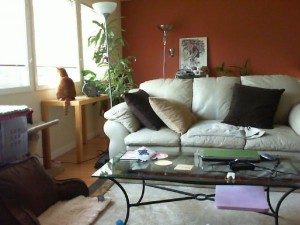 Its travel time!  And like any traveler who lived in Oakland I’m worried someone is going to break into my place.  There are older tricks I use to try to reduce the risk, have friends stopping by, I have a timer that turns on and off the lights and TV.  The normal stuff for those who cannot afford an expensive home monitoring system. Now, in the age of cheap electronics and internet connections, we can make our own!  And like any good geek who wants an extra bit of security, and keep in eye on his cat, I decided to build one.  And I
decided to see just how cheap can I build one that works.

So a few things we are assuming here..  You have a computer and/or laptop, and you have a wifi router and an internet connection.  You can do this with a wire only router, but that limits your flexibility a bit for where to place the camera.

So lets get our equipment in order.  In my case, I have a desktop PC and a laptop.  Both running windows.  I also have 2 webcams.  Both I got for under $30.  One is an older 800×600 and the other is a 720HD I got on sale. 🙂  Remember, we are doing this on the cheap, but if you are willing to spend a few more bucks, you could get a wireless camera that has pan/tilt controls, but I did not feel like spending $125 on this.

First you have to decided what exactly you want to capture and why. In my case, the building already has some outside security, so I just need to focus on people who defeated that and made it inside.  My second requirement is the see when my cat is up and about. (ok, its really my girlfriend asking for this, but trying to catch my cat who lives in stealth mode has turned out to be the most fun.)  So I decided I wanted to use the cheaper camera to watch the bed where she sleeps and the nicer camera in the front room where both the cat walks around and the most likely place a thief is going to go.  Next, hiding the cameras.  This is harder.  Not only do you need to find a good place to see as much of room as possible, but you need to hide it as well.  I dont think you need to go overboard like hollowing out a book or cutting up a stuffed doll, unless your into that kind of thing.  In my case I have it on a book shelf and surrounded the webcam with a Japanese pikachu and a collection of angry birds… dont ask how I got these. So all this AND we still need to be close enough to the computer for the usb cable to reach without being too obvious.  I thus recommend getting at least 1 usb extender.  In my case I was pretty lucky in that the webcam could reach the PC and still be somewhat hidden. Next, change the power setting on your computer so that the screen goes dark, but the computer never goes to sleep. Also turn the sound off.  BTW, if you do not have a second computer, you can get an old used PC online for around $200.  All it needs is usb and wifi.  My second camera is running off a really old Toshiba that has 1 g of ram and some old processor.  Heck, its so old I do not know whats it running. But does not matter.  You only need to run 2 programs.

Keep in mind, once the thief(s) have gotten into your place, your stuff is pretty much history. So your home monitoring system is not to serve as a deterrent but instead help the police find the people who broke in.  So making sure we get the best pics of the perps we can is key here.  At some point they are going to find your webcam, so that is why I did not go over the top trying to hide it because once they start grabbing your stuff, its pretty much over.  This is the one case a fully independent IP camera has it advantage.  Even when they are nicking your computers, the camera keeps rolling.  If you did spend the money on a wireless camera, then you DO want to hide that bad boy to get as much film as possible of the crime scene. Since its only a matter off time before they find the cameras, we need to get the pics uploaded as fast as possible. In this case we need motion detection.  And that is where the software comes into play. There are lots of there to choice from, however I’m going to go with Yawcam.  Its a java app so that means it will work on almost any platform.

Its not fancy, and takes a little bit a tweaking, but if you are geek enough to be building your own webcam home monitoring system in the first place, you should be OK.  I’ll give some tips though.

Software set up and deployment 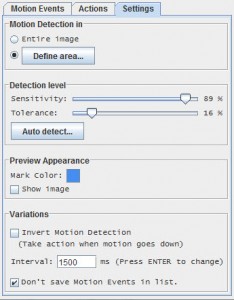 Fire up your machines and lets get to it.  First download Yawcam here. Install as instructed.  Now now time to setup. We are only going to do the basics here, motion detecting and email notification. Ok, click on ‘Window’ and ‘Motion Detection.  Lets tweak those settings. Since I want to catch my cat, I have to set the sensitivity WAY higher then normal. My camera has a pretty wide view so catching that little fur ball is going to be tricky.  I had the cat in the room as I was working on that and that little bugger is smooth!!  I see why we get the term cat burglar.  I did not even bother with sound detection. She will in mid pounce before you hear anything anyway.  No.  To catch this gal, we need to push the detection limits. So we are going to play with 2 settings. The Sensitivity and the Tolerance that you will find under the ‘Settings’ tab.  I had Sensitivity set to 89% and Tolerance set to 16%.  Basically I can catch an oversize bee with these settings.  And STILL, she slipped by a few times!  Man, she is hard to catch. So I has to make one more tweak.  I changed the area that the software is looking for movement to the area where my fur ball normally walks.  You can adjust this by changing the ‘Motion Detection in’ from Entire image to Define area. Caution! Pet hunting is fun, but remember, we want to catch our scumbags who break into our place as well, so do not set the area select too small.  You have to figure a compromise, the smaller the area, the more sensitive you can make the settings, but then you may miss key areas you want to monitor.

I have an iPad and love teamviewer. Once of my favs.  I tend to recommend teamviewer to my non tech friends because of how dead simple this app is as well as the fact it is PC/Apple friendly and it works on you iphone and iPad. My only complaint about TeamViewer is that it does not support sound.  Ah well, no matter, moving on..  So install TeamViewer on your machine(s).  Sign up for the free account.  It will make logging on easier epically if you have more then 1 machine.  The reason you want to do this is no matter how well you set up your system, you will still need to tweak things.  For example we left for our trip at o’dark 30.  Since I have the sensitivity set to molecule level, video noise and sun shadows and change in brightness was being picked up as movement, so I had to remote in and turn off motion detection. A fix for this is to get a night light strong enough to keep this from happening and leave it on.  I did not realize this till it was too late, so lesson learned. However, I’m going to take this as a further challenge to tweak the settings.   The cool part of using TeamViewer is that you can get a live view video feed anytime!  Nice!  Of course Yawcam supports setting up a live view and even storing that video to disk and the cloud.  If you are brave you can set up your firewall to allow this, but I did not want to bother.  Its more important that I get images.

Congrats!  Your up and running

Now that was not all that hard was it?  We only spend around $50 for two camera (assuming you do not already have them) and another $200 for an old cheap laptop.  The cool thing is you can keep expanding as you need more rooms or more views covered.  At some point as you want to add more coverage, you may want to start spending some money and getting IP wifi wireless cameras.  Yawcam will pick those up as well.  I really wish you only find yourself having fun playing with your new set up to track your pets or buddies who are suppose to check on your place and never need to use this to file a police report.  BTW, remember you MUST let anyone who is coming into your place know you have this set up.  Its against the law to film anyone in secret.  Plus its just plain creepy. 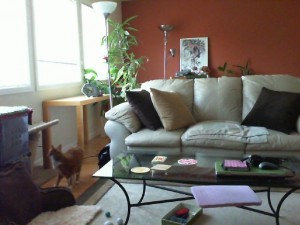