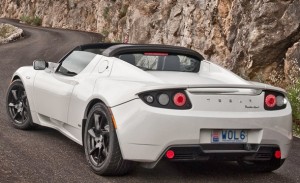 A story broke a few days back from a blogger named Michael DeGusta saying that if you let your Telsa’s car battery full drain that you have effectively bricked your car. He gave 5 examples of cars that were fully drained and thus ‘bricked’.  He reports one example of a user who took his car to Japan and it died because the power hook up was not compatible. The most serious of this issue is the claim that once you brick you car, it cannot be fix short of spending $40,000 for new batteries.  THAT got my attention.. and also got me thinking.  That does not make any sense at all.

The battery can be fully drained simply by parking the vehicle too long without charging it because of the vehicles’ always-on systems running quietly in the background and using minuscule amounts of power over the hours and days. For a Tesla Roadster, this can happen over the course of 11 weeks, less if the battery is not fully charged when the car is parked.

“Either these issues will be resolved by the time it’s ready, Tesla will be gone by then, or I’ll most likely give up my spot and get a refund,”

I have lots of electric equipment that run on batteries, esp my laptops and have drained them almost dead and never was the batter ‘bricked’ because the battery is smart enough to protect itself.  I would HAVE to think Tesla thought of this and has systems in place to protect the over 8,000 batteries that makes up the cars powerplant.  Something did not add up.  Turns out I was right.

Telsa came out with its own blog post challenging some of the statements made by DeGusta saying that; yes you can drain the car dead so that you cannot charge is normally, however, a simple reset of the battery pack will take care of this and then a full recharge.  Hardly the $40,000 replacement cost DeGusta claims. Tesla went further to rebuke DeGusta point by point.  From Tesla.

Of the many pleasures that Tesla owners have, one of the most appreciated is nearly worry-free maintenance of their vehicles. As an owner, you no longer have to worry about constant oil changes, exhaust checks, or spark plug replacements. You can drive it for many years by simply plugging it in when needed, and performing maintenance once a year. If anything goes wrong, call us. We’re always happy to hear from our owners. Tesla routinely provides exceptional service that is above and beyond what people have come to expect.

In return, we ask that you remember to charge it. A plugged-in Tesla is not only charging its battery, it is also keeping key systems within the car functioning properly. Tesla owners around the world keep their cars charged on a daily basis without any issues at all. If ever the battery in your Tesla runs low, the car is designed to let you know with repeated visual and audible warnings. If you continue to ignore the warnings, they will persist and increase. The vehicle also protects the battery itself by communicating with other systems in the car to conserve energy when the state of charge gets too low. Starting with Roadster 2.0, owners can also elect for their car to contact Tesla headquarters once the state of charge falls below a specified level, and we can then contact the owner.

Even in cases of neglect, the latest Tesla batteries are industry leaders. The earliest Roadsters will take over two months to discharge if parked at a 50 percent charge without being plugged in. From that starting point, Tesla has consistently innovated and improved our battery technology. For example, a Model S battery parked with 50 percent charge would approach full discharge only after about 12 months. Model S batteries also have the ability to protect themselves as they approach very low charge levels by going into a “deep sleep” mode that lowers the loss even further. A Model S will not allow its battery to fall below about 5 percent charge. At that point the car can still sit for many months. Of course you can drive a Model S to 0 percent charge, but even in that circumstance, if you plug it in within 30 days, the battery will recover normally.

I have to say DeGusta claims are disingenuous or he has a basic misconception of how batteries work. I think my favorite analagy came from Sam Jaffe explains at the Clean Energy Blog: as read on VentureBeat