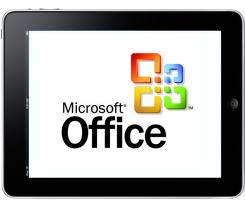 Yesterday, there were rumors of a Microsoft project to create apps for tablets that will allow greater access to MS Office applications.  Next comes the release of an upgraded Google Documents for Android that provides document editing and real-time collaboration, and now comes onLive upgraded iOS app that provides a windows 7 desktop on the iPad with the basic office apps, Word, Excel and Powerpoint and now a full featured browser thus proving the viability of full blown cloud computing for the mobile business professional. Don’t forget iWork for those Apple users that have made the jump. Its pretty clear the major players have realized business it moving to the cloud and accessing it more and more through tablets.  Add to this the growth of cloud based storage systems like Dropbox, Box.net, iCloud for the Mac and recently SkyDrive by Microsoft, its clear the tablet business users is a growing market that cannot be ignored.  The rush is on.

Now of the apps I have tried, (I have not seen anything from MS) none are anywhere near the promise of efficient and effective productivity such that we can abandon the desktop.  However, these are the opening moves by the major players to attract and capture the business user on tablets.  However, you can currently get full access to office apps right now by using remote desktop apps like Teamviewer or various VNC or my fav, RDC lite for iOS. The only downside is that you need to have your server machine on, client software running and with exception to teamviewer, a way to get past your firewall. But as cool as remote desktop connections are, they are a bit slow. OnLive is WAY smoother, providing the user with an almost native experience using the office suite and super fast web browsing, but they both suffer from the same limitation; your internet connection.  First off, if you do not have a connection you are out of luck. Forget working on the plane or train unless its provided or you bring your own, and hopefully what you bring is better then 3G. If you want true mobility, you need to go with a native app.

Although we are all impatiently waiting for Microsoft to announce its MS Office suite on the iPad, you do have other options. There are a number of apps out there, for both iOS and Android, that can edit MS Office files with documents to go being the gold standard for iOS. And although not perfect, you can still edit Google Docs in the offline mode as well through a browser and if you are an Android users, Google Documents will not only support editing, but realtime as well.

The basic conclusion is that the rush to provide a unified and powerful office environment for the tablet has just started and this could be the one big break for Microsoft to become relevant in the tablet space.  But there are two major hurtles MS faces, Apple has and would rather promote iWork on the iOS and Google would rather promote Google Docs on the Android platform.  Unless Microsoft can suddenly break into the tablet market with its windows 8 platform, MS will be on the outside looking in.