So I was recently exposed to the post Augmented Reality Finds a Place to Fit: Shopping! The article states, “Two recent AR implementations show promise, however, by adding value and actually demonstrating how useful the technology can be.” The author of the post is referring to Converse’s Sampler application for AppleiOS devices and a TryOnBathingSuit application created by ImmediaC. With such an endorsement, I had to check these apps out. 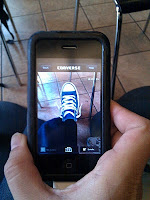 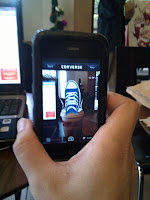 Perhaps I am biased as I work with the technology and know what is possible with it, but I am not impressed with this application at all. Sure once I activate the app I can see how the sneaker will look on my foot with a superimposed image, but I can see how a sneaker will look on my coffee cup or anything else, as it is just that, a superimposed image. It floats in the middle of the live camera feed. There isn’t any form of tracking or foot recognition. I wouldn’t say FAIL on this app, but I will say I expected more from a brand like Converse if trying to create an augmented reality user experience. Follow Adidas lead and get more crafty with the tech.
Review: TryOnBathingSuit application
I went to the ImmediaC site to give it a try and immediately was told I could not view it in Chrome only FireFox or IE. Using one of the supported players, it requires I get a plug-in from AR company Total Immersion. Besides the frustration of having to install a plugin for the experience, I already have one installed for the Transformers application TI did a while back and the fact that the player by the same company doesn’t work for both applications stopped me there in my interest of trying on a virtual bathing suit.
Although I would never use an application like this for the above and other reasons, I don’t look good in a two piece, I can see how this could be helpful for women trying on bathing suits. It is something one can do in the privacy of their own home and addresses the health considerations of trying on bottoms as I have been told from female friends.
The augmented reality dressing room seems to be a hot item. Using AR to see how clothes would fit or look on a person is something that I see as somewhat useful applications. There are plenty of these popping into the mainstream stores and online.

As stated in the article, “For years, we’ve been hearing about the potential for augmented reality (AR), a technology that combines the physical world with virtual overlays. More than two and half years ago, research firm Gartner dubbed AR as one of its top 10 disruptive technologies for 2008 to 2012, for example. We’re over the hump of that hype cycle, but AR hasn’t yet gone mainstream and likely won’t for 5 to 10 years because it’s still a solution in search of problem.“ 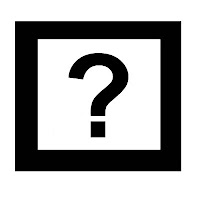 While I do commend the author for writing more about augmented reality, I am somewhat shocked that after years now of the technology being shoved into the mainstream by gimmicky ad campaigns and floating points of interest on mobile phones that applications like those covered in the piece are still of interest to bloggers looking for more from the technology. If one is looking for more hope with AR as a technology, here is a freebie, go to town. Simply write about other ways the technology is currently used to add value and be helpful to our daily lives. You will be doing developers and others involved in AR a huge service.