I update my Chrome browser to give the Google Body Browser a test drive. I really wanted to test it on the Google CR-48 Chrome OS laptop, but you cannot update to a Beta version of Chrome, and as you will read, there is no point anyway. So I gave it a shot and it felt like I was in a time warp. I remember my days in VRML (now X3d) and it feel like that. Both look and rendering speed.  Not a bad thing. And this is all HTML5 – WebGL keep in mind.
I was testing on a X61 IBM tablet laptop; dual core 1.6 with 2G of ram and the Intel grx chipset. Plenty fast enough for normal daily use, but not enough for 3D.   So what going on here?  Well if you look at my CPU and mem usages, I was using 400k+ of ram for just this tab. There is a good deal of data loading up here.

When I zoom in, or have just the skin or just the bones, it renders pretty fast, but once you cross some number of polys in the scene, its bogs down because the onboard graphics card just does not have the memory.  Not to say its not useful. Despite the lack of responsiveness  I was still able to explore the homunculus. So if you are viewing this on a older machine or a business laptop, here are a 3 tips.

I then tested on my desktop and it was smooth as silk. So if you are running on a more modern laptop or a desktop with a good graphic card, you should be good to go, but the point here is that there is no magic going on. Rendering 3D is still rendering 3D and either you have the chips to support it or you don’t.

The program itself is pretty cool. I love the fact I can click on any major body part and get a label and then click again and all other parts go to about 25% opacity making its easier to look at the part you clicked on.  A tip, by hiding parts of the homunculus when clicking on a body part twice will speed up rendering if you are on a weak machine… I wonder how this would work on my iPad?

All and all, this is pretty interesting example of 3D for medical uses, although with exception to first year med students and people who are just plain interested, there is not a lot of use cases I can see.  However I would really like to see a side window open up giving me details on the body part I clicked on.  I expect to see that in a next version soon.

Here are some more screenshot… 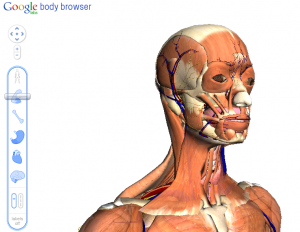 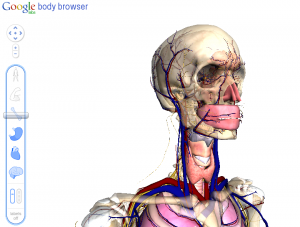 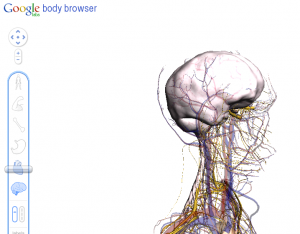