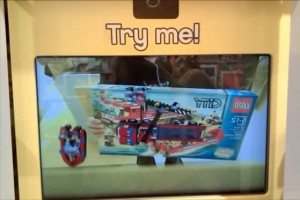 I got the chance to play with this for the first time at a Lego store at Northpark Mall in Dallas, Texas. See video here Augmented Reality Legos.

Hold up selected boxes of Lego to a kiosk that contains of a webcam, a screen, and Metaio’s AR technology. A 3D animation of the assembled toy is projected on screen on top of the box the consumer is holding. It is then possible to view the finished toy on screen from all angles.

Most of the patrons in the store walked right past this kiosk until I started to play with this. Once people saw what I was doing they took more interest in the AR kiosk and then began to play with it. I recommend Lego put better indicators on the boxes that have the AR component. People enjoyed the 3D animations from the boxes that worked but frustration was apparent as most boxes were not AR ready and this caused lack of interest quickly after the initial wow. Regardless, a cool application of technology with a childhood favorite.