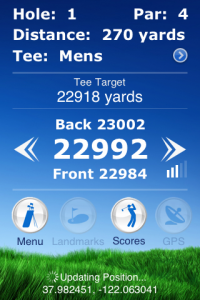 So I went golfing a few days back and decided to give GolfTraxx another go.  If you remember my first report on it.. beware of rant.. I was not impressed.  So this time I tried it at another course in Sacramento and it seemed to work on some holes, not on others.  The only thing I could figure is;  since they switched the front 9 and the back 9, I somehow messed up converting the hole order (which I somewhat doubt since I had my brother download the same app and give it a try.. his was not even close), or they just have 1 hole messed up, and it happens to be where the links link up with each other for a switchback and a short par 3.

Either way, I was still annoyed when it did not work.. but where it did.. the value add was great!  Knowing exactly the distance (well as exact as an iphone is going to give you) to the green is quite useful on the second shot.  1/2 way through the round, my brother downloaded bGolfMemoir and started putting in the data as we played.  Hopefully he will get out there again and get the holes we missed.  Will be curious to see how well that works.  As for me, the next time I’m out there I’ll play 18 holes and take notes as to where it worked and where it failed.  If I can get at least 80% functional, it will be worth it.