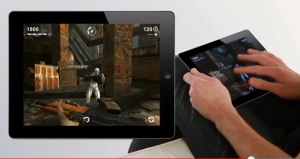 I have played my fair share of FPS games on the iPad and never enjoyed any of them.  When it comes to the UI for games, only SimCity like games seems to make the natural leap to iPad.  Well I think that has changed.  Enter ‘The Drowning’.  This game is not out yet, which really kills me, but just by watching the video and listening to how they went about this, its clear to me we have a break through with iPad gaming controls.  Check out the video at the end of this post.

What I really love about this new approach is that they threw away the typical convention of the joystick controller and instead embraced swiping which is more common and natural with a slate display.  Also, position navigation now using point and go which we have already seen on some desktop games.  As with these games when you click on a spot in the environment, your POV goes to that position.  If there is something in the way, it goes around it.  The biggest change for me dropping the concept that when you shoot, your target must be in the middle of your view frame.  Instead, you press two fingers to the place you want your bullets to go.  The further away the target is, the harder this shot will be.  You can also strafe by two touching one position to another.

All these changes may seem like you are being asked to relearn how to use a FPS, and in a way you are.  But you are not holding a controller or using a mouse, so asking a player to try to use a virtual joystick is worse then trying to learn a new system.  Also, as you can see in the video, it does not look all that hard.  I would bet that with a few hours of practice, one would be able to master this quite quickly.

When I first watched this was ready to jump up and get my iPad … till I found out its not ready yet.  GRRRRR>>>   Hurry up then!

BTW, check out this really well done interview of Ben Cousins by Dean Takahashi on GamesBeat.