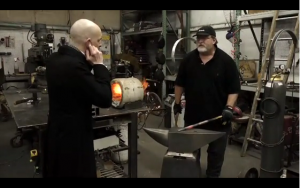 First off, the idea.  If you have ever played any sword playing game you know it pretty much sucks.  Triggers for a sword? Really?  I was hoping that the Wii or perhaps the xBox would make this better.  But not.  So the guys at the Subutai Corporation decided to do something about this by creating a kickstarter project called Clang.  They are creating a SDK and controller for better sword based games.  But not just creating a controller, but incorporating the various elements of sword play into the SDK.  No small feat. Based on the video they are taking a heuristic approach by trying to incorporate body movement as well as sword position and acceleration.  But the cool part is the video they created.  Heck, the vid alone must have been around 10k to produce.

And that is the part you need to check out.  Its a pretty good vid.  Not since the Best F**cking razor blade video have I’ve seen such a cool, fun video for a new product.  So check it out at the end of the post.

This is a kickstarted project so they are trying to raise money for the project.  Aside from the video being cool, the project its self is pretty great as well.  They are really trying to take HCI element of sword fighting to the next level, or first level for those of you who think we have not even scratched the surface.  They just crossed the $100k level but need to hit $500k.  There is 28 days left, so if they can keep this rate, they should make it.  Be sure to watch the ‘in the weeds’ video as well where they go into more detail of how this will work.

And be sure to check out ‘in the weeds’