I’m a reddit lurker. I’ll fess that now. I came across a pretty good comic on how to use your iphone instead of your glasses in the morning, or my case, when I misplace them.. Which I do often. I thought, ‘the world must know!’  Instead, I got sidetracked by work and other life stuff and didn’t got around to it. 2 days later, another tech blog beat me to the punch.  DAMN you full time bloggers!  Ah well.

Here it is anyway.  Next step, I need to find the original post to give credit. I emailed the link to myself but not the post.. Fail. 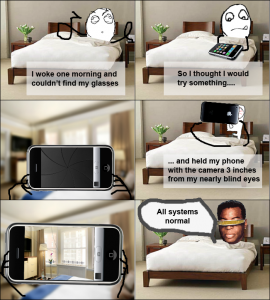 Another good tip is to use your iphone as a flash light. Most people know that you can get enough light just from the screen being on to see, however one time we were out shopping at the power went out.  Next thing you know, everyone took out their cell phones and kept on shopping. A few people, myself included, knew to crank up the camera app and turn on the standby flash.  It was quite the sight being in a dead black store with no windows and 50 some people walking around using just cell phones.  Spooky in a way.  The power but dammit, they NEED TO SHOP!!