2010 was a great year for the more innovative technologies that interest me and 2011 is looking to be even better. It is a few hours until midnight and before I dash out for New Year Eve, I felt a look at the 2011 tech crystal ball was in order. Here are my top three off the cuff.

Scan to receive the message.

QR Code Markers:
A QR Code is a matrix barcode (or two-dimensional code), readable by QR scanners, mobile phones with a camera, and smartphones. The code consists of black modules arranged in a square pattern on a white background. The information encoded can be text, URL or other data.

I am starting to see more QR markers in the mainstream via print advertisements, posters, and other media outlets. I feel by the end of 2011, most of my fellow Americans will know what these markers do, even if they don’t use them.

Augmented Reality Games
With companies like Ogmento and Layar that got nice rounds of funding this past year, the growth of AR platforms and development shops, I am looking forward to more augmented reality and location-based games in 2011.

Unfortunately I think that mobile AR apps that just show various floating points-of-interest will still have a hard time taking off as most non-techies that I see that use these apps are amazed by the technology but just don’t see themselves using it past a “wow, I did that” factor. 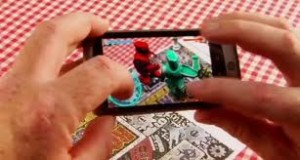 No Touch Interfaces
There is no doubt that the Microsoft Kinect is a game changer when it comes to how we interact with our machines. The device has claimed the title of fastest adopted consumer electronic device ever, surpassing the recent title holder the iPad. In the two months since its release, a growing number of open source tools and hacks (www.kinecthacks.net) have surfaced and what will be possible this time next year will truly be mind blowing I am sure. Eg. Kinect Teleoperation of Humanoid Robot

Thanks for everything 2010 and best wishes to all Internetians in 2011!