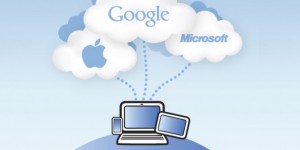 This has been building up for sometime.  As with the Great Mobile War and Browser War, the Great Office Cloud War has 3 players, Google, Apple and now Microsoft.

In the beginning, there was Google Docs.  Google docs were pretty simple but had one great advantage.  You could start a doc on one machine, go to another and there it was, all through a web browser. Did not matter what OS.  Simple enough but amazing for people like me.  Then the fact I could access on a tablet and somewhat on a good phone was even better!   And then I could share it?  Crazy.  But Microsoft was not too worried about that, they were more concerned with Firefox and Chrome finally taking market share away from I.E.

As time goes on Google’s Docs get more sophisticated and connected with Gmail and Google Drive and other 3rd party apps, you could run your office completely in the cloud.  And many people did. Especially those of us in the Valley in startup land.  Now  Microsoft was starting to pay attention, although its was mostly geeks and start up companies with little money that were dropping office.

However when Apple decided to drop Office and create their own work suite did bells start to go off at Microsoft.  Suddenly the cash cow that did not seem to ever have an end, was losing market share.  Making things worse is more and more people were beginning to use tablet and mobile devices at work, both of which were controlled by Google and Apple.  Suddenly the battle lines were drawn.  The next king of the Office would be the service that can provide powerful tools as we are used to with:

3) Support on any device from any OS.

Microsoft was weak on all three fronts.  Office could not fully run in the cloud, real-time collaboration required expensive 3rd party tools and Apple and Google owned the tablet and mobile space.

But of course, this is Microsoft, they do what they always do when threaten, throw a bunch of money at it, screw it up, then throw more money and finally get competitive.

Fast forward to the post Balmer era and we are seeing Microsoft move into cloud based services in a big way. So much so that soon Microsoft’s biggest product will no longer be Windows, or Office, or XBox, but Azure, their cloud service. Many people have not heard of Azure but it will become center all Microsoft services, many of which will be called 365. Office 365, Windows 365 and even Video 365, more on Video 365 later. Also we have seen Microsoft buy Acompli and rebrand it as Outlook for mobile and I recently downloaded OneNote on my iPad. Microsoft is making a big push into cloud services on non windows devices with its Office 365 suite soon to be followed by Windows itself.

So why is Microsoft moving so hard and so fast? Because they have already lost out on the mobile phone market and with Google drive and Docs and now Apple releasing iWork on iCloud, allowing anyone to use Apple Office tools, they are seeing a threat to its dominance with MS Office. Worse, a new generation of users are not interested in buying software licenses but instead, ‘renting’ services for only when they need it and typically through a cloud service, and the market is growing VERY fast. Further, options like ChromeBook using the Google suite is a far cheaper and almost as effective means for running a virtual office. Many users, myself included, do pretty much all their work on the cloud using cloud based apps. I have dropbox for my files, use google docs for most of my writing and collaborating and even now I’m writing the second part of this post on my ipad after starting it last night on my main PC. Microsoft knows it needs to moving its services to satisfy how a new generation of workers demand to be able to work; anywhere, anytime, on anything.

So what to watch..  Microsoft is not giving up on Windows phone but they know the need to get their services on the devices people are using, that means Android and iOS.  I do not imagine Apple or Google is going to be too excited to help Microsoft out, but I know who might.  Samsung.  Samsung is one of the largest competitors to Apple in the mobile market.  Although losing some space recently, they are not the ones to give up.  I expect Samsung to fight for market share as well as keep on the leading edge with wearable and even VR displays.  Microsoft needs a partner like Samsung to quickly make a play for getting their office apps on mobile devices quickly.  There is not enough time to ‘wait’ for Microsoft phones to one day become a market player.

Another battle front just starting to open is micro PC devices.  Right now you can get a cheap Chromebook to pretty much do 90% of your information processing needs.  However, watch for the Microsoft ‘Stick’ to come onto the scene running Windows 10.  This device will fight for ownership of your TV’s HDMI port just as ChromeCast has done.  And VR?  Who has NOT seen Microsoft’s AR device preview called HoloLens?

Times they are a changing. The days of Microsoft and everyone else is gone, Microsoft knows this.  Its going to be a Battle Royal!