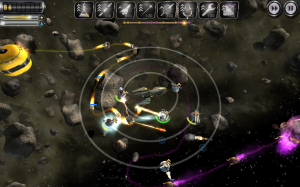 UnstoppableGorg is not out yet, but they did release a preview video. I like this. I like the variation of being able to move defensive weapons around, even if its just orbit. I also have to give them an upvote for the fun B movie horror flick theme. Fun.

Unstoppable Gorg is a lovingly crafted homage to vintage sci-fi films from the 1950s. Flying saucers, rubbery aliens, dodgy effects, it’s got it all. The game’s story scenes were shot on film using models, miniatures and live action actors and then edited together with genuine archive footage to create a classic sci-fi experience that is out of this world.

Jaakko Haapasalo, Head of Futuremark Games Studio, who also plays the role of Radiant Beem in the game, said,

“With Unstoppable Gorg, we embraced the film techniques used in the golden age of sci-fi to create an authentic visual style that has never been seen in a game before. It’s the difference between the Star Wars films that people love, with their special effects created with models, and the unpopular prequels with their heavy-handed CGI.”

So check out the vid. Once I get word that its out I’ll download and give it a try.