I have put forth many times that Apple could kill off or make life REALLY hard for jailbreakers if they wanted to, but they don’t.  In this street interview by Haroon, Cydia Creator Jay Freeman talked a bit about how the new features in iOS 5 will not make jailbreak irrelevant nor are they trying to.  Then later he (although not right out) hints that he thinks Apple is letting the jailbreak community live and paying very close attention to what works and what does not. 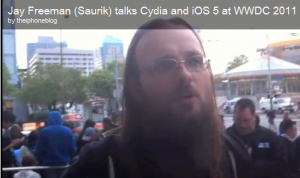 Even though iOS 5 has been available to the dev community for awhile yet, now jailbreak news has leaked out.  I’m sure they are waiting for a few more details on the hardware as well as letting the API set firm up before releasing anything.  But I expect a jailbreak for 5 within a week of public release.

BTW the current untethered jailbreak still works for 4.3.3  So that’s 3 updates in a row where the old exploits are still working.  Win.

So if you ever see a post from some ‘expert’ saying which ever iOS release is going to spell the end of jailbreaking, take this as one more point that they are most likely wrong.  Video below.
httpv://www.youtube.com/watch?feature=player_embedded&v=KYWV69KWdE4#at=38