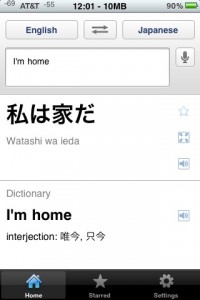 I still need to download and play with this, but I’m pretty excited. Been looking for a good quick translator to translate English to Japanese.   I’ll update this post as soon as I download the thing. I just tried it and its pretty good.  I think.

BTW, you have to look on the second page of apps listings if you are searching the app store on your iphone. I’m sure it will make the first page soon.

Back in August 2008, we launched a Google Translate HTML5 web app for iPhone users. Today, the official Google Translate for iPhone app is available for download from the App Store. The new app has all of the features of the web app, plus some significant new additions designed to improve your overall translation experience.

Speak to translate
The new app accepts voice input for 15 languages, and—just like the web app—you can translate a word or phrase into one of more than 50 languages. For voice input, just press the microphone icon next to the text box and say what you want to translate as seen in these screen shots.