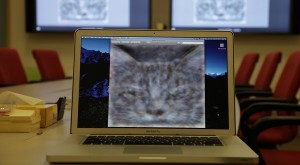 Google created the largest neural networks for machine learning by connecting 16,000 computer processors.  And what did they do with all this power?  Watch videos of course. Presented with 10 million digital images found in YouTube videos, what did Google’s brain do? What millions of humans do with YouTube: looked for cats.  From the NYT

The neural network taught itself to recognize cats, which is actually no frivolous activity. This week the researchers will present the results of their work at a conference in Edinburgh, Scotland.

“We never told it during the training, ‘This is a cat,’ ” said Dr. Dean, who originally helped Google design the software that lets it easily break programs into many tasks that can be computed simultaneously. “It basically invented the concept of a cat. We probably have other ones that are side views of cats.”

The funny thing is this report, they really say WHY the came up a cat.  They actually came up with many faces, limbs and other things the computer was able to identify and a consistent ‘thing’ but I guess like everything on the interwebs, its cooler when its a cat.